Fazl asks all Opposition parliamentarians to resign by Dec 31 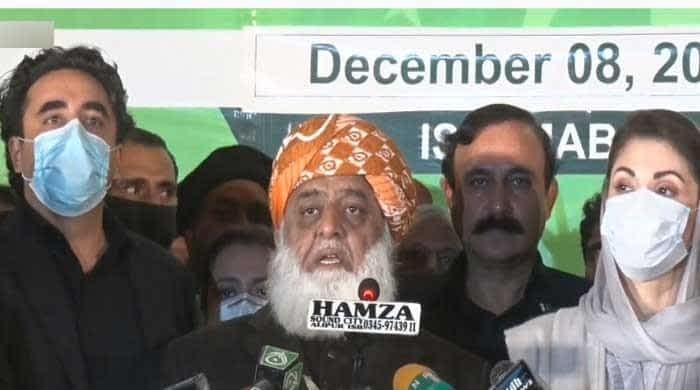 Pakistan Democratic Movement chief Fazlur Rehman has given all Opposition parliamentarians till December 31 to submit their resignations to their party heads.

Fazlur Rehman said that this includes provincial as well as national assembly lawmakers.

The chief  of the 11-party Opposition alliance, in a press conference, said that the heads of all parties participated in a meeting today in Islamabad, with PML-N supremo Nawaz Sharif, PPP co-chairman Asif Ali Zardari and BNP-M chief Sardar Akhtar Mengal in attendance via video link.

“Everyone agreed with utmost resolve that the December 13 rally will be held at Minar-e-Pakistan and if the government tries to create any hurdles the consequences will be far more grave than what transpired in Multan,” said Fazlur Rehman.

He was referring to the PDM rally in Multan which was held at a makeshift venue at Ghanta Ghar Chowk, after the authorities dislodged Opposition workers who had broken into the original venue, the Qila Kohna Qasim Bagh Stadium a night earlier.

“Today the fake prime minister has again said some things which appear to be an offer to the Opposition for a dialogue. It is not a dialogue, however, that he seeks. It is an NRO (concession under National Reconciliation Ordinance),” Fazlur Rehman went on to say.

The PDM chief said that the Opposition has “rejected this offer” and that Prime Minister Imran Khan “is not worthy enough to hold talks with”.

He said that in a steering committee meeting tomorrow, a schedule for nationwide rallies and protests will be finalised, as well as the decision as to when the long march to Islamabad shall begin.

“We are taking our movement forward. We will not allow the people to be disappointed at any cost. The enthusiasm with which they participated in all our rallies and the manner in which their response is growing, it will grow even further.

“The Lahore rally will be historic and will be the final nail in the government’s coffin,” he said.

As he proceeded to leave, a journalist asked what the course of action will be if party members are arrested. “We have not even thought of such a thing,” he said.

In response to another question, in which a reporter sought to  ascertain the Opposition’s strategy in the event the government is “unfazed” by all these moes, the PDM chief said: “Oh they are worried, believe me, sir. The legs of the seat of premiership are wobbling. All that is needed is a final kick.”

Fazlur Rehman vowed that once handed in, the resignations will not be withdrawn, not like the PTI  lawmakers who had resigned during the 2014  sit-in but then returned to the parliament a few months later.

To another question, he said: “Whether or not the selectors and selected stand together, this movement is against the whole system. We are against rigging. They should, themselves, think of what the public perception is about rigging.”

Earlier, reacting to the PDM’s movement, Prime Minister Imran Khan had said that even if the Opposition holds 10 public meetings at the Minar-e-Pakistan, it would make no difference to his government.

PM Imran Khan, while chairing a meeting of the government and party spokespersons, had made it clear that the Opposition “do not know him”.

The prime minister told participants that the Opposition is seeking a confrontation but assured them that the government would not give them a chance nor would it stop their rallies. However, he had informed them that legal action would be taken against those providing services to the rallies.

917 fined in  crackdown against encroachments  mafia