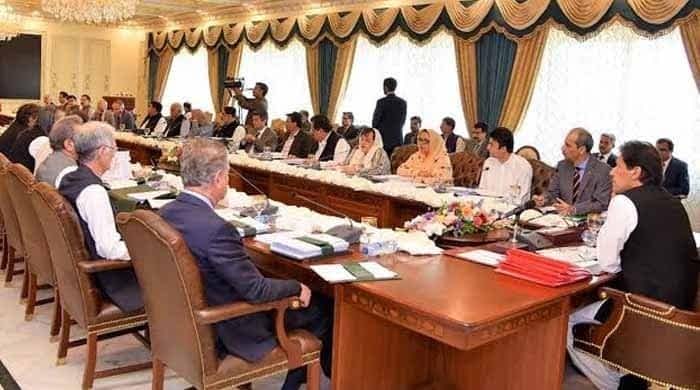 A file photo of a federal cabinet meeting. — File photo

Federal Minister for Information Shibli Faraz said Monday that the federal government has decided to launch an investigation into the Broadsheet LLC scandal — days after the matter came to light.

“Shibli Faraz will be the convener of the committee which will provide suggestions to the federal cabinet over the Broadsheet [scandal],” the information minister said.

The committee has been given the task to review Pakistan’s agreement with Broadsheet LCC for the period 2002-2018, sources informed Geo News.

“An investigation will be launched to find out who took advantage of the deal,” the sources said as they revealed the cabinet’s decisions.

Meanwhile, speaking about the Pakistan Democratic Movement (PDM), the prime minister said that the “Opposition’s alliance would be allowed to hold their protest.”

He, however, warned the PDM and said that the law would come into action if the 11-party alliance attempts to move against it.

Regarding the matter of religious parties holding sit-ins and protests, the cabinet decided to consult the ulema. “This is a sensitive issue. We will take the ulema into confidence over this matter,” the prime minister added.

Pakistan made a payment of $28.706 million (Rs4.59 billion) to the British firm Broadsheet LLC after losing the long-running litigation at the London High Court.

The amount was transferred from the Pakistan High Commission (PHC) on behalf of the National Accountability Bureau (NAB) to the assets recovery firm — 21 years after it was hired to trace alleged foreign assets of dozens of Pakistanis which it failed to find any.

The London High Court’s Financial Division had issued on December 17 a Final Third Party Order for payment to NAB’s former client Broadsheet by December 30 — drawing curtains on a case that has cost Pakistani taxpayers billions of rupees.