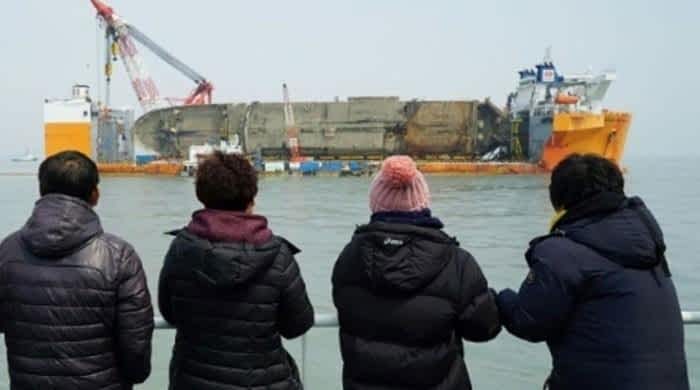 BUSAN: A new film about the Sewol ferry sinking, a disaster that killed more than 300 people — most of them children, will premiere at Asia´s biggest film festival, five years after director Lee Sang-ho caused controversy with his first documentary on the topic.

“Diving Bell”, which screened at the 2014 Busan International Film Festival (BIFF), criticised then leader Park Geun-hye´s administration on its handling of the sinking.

In response, angry officials cut BIFF´s $1.3 million funding by 50 percent, with Busan´s mayor at the time criticising the movie as “too political” for such an event.

The city´s action echoed the national government´s approach — more than 10,000 artists who criticised Park or simply expressed support for the Sewol victims´ families were blacklisted.

There was wild media speculation on what she was doing, but investigators concluded she was at her residence for the first few critical hours after the disaster.

Park, who was later impeached and is currently serving a 25 year jail term for bribery, extortion, abuse of power and other charges, has never given a clear reason for her lack of public response as the tragedy unfolded.

Tickets for “President´s 7 Hours” BIFF screenings sold out in just 10 minutes, according to the movie´s producers.

“I hope the fire (for justice) spreads to all corners of the country from BIFF just like it did with ´Diving Bell´ five years ago,” Lee said.

The Sewol disaster remains a national trauma, having exposed a bitter political divide where families of the victims — mostly from a working class suburb — were accused by right wing groups of being North Korea sympathisers because they criticised the conservative politicians in power.

The Sewol´s captain Lee Joon-seok — one of the first people to leave the sinking ship, abandoning hundreds of children trapped inside — was sentenced to life in prison for negligence and murder.

Other crew members were jailed for terms ranging from 18 months to 12 years.

But families of the victims are demanding those in government at the time should be held to account, and have called for fresh investigations into key figures of the Park administration, including Hwang Kyo-ahn, who was justice minister and is now leader of the main opposition Liberty Korea Party.

Lee, who is also a journalist, has demanded all those culpable be brought to justice, accusing prosecutors of selective law enforcement.

He pointed to the speed with which South Korean justice minister Cho Kuk´s home was raided in a corruption probe involving his daughter´s admission to a medical school, compared to the investigations into the role of key political figures in the Sewol incident.

“Let´s not forget the outcry of families of Sewol victims who say (prosecutors) should arrest those responsible for the Sewol (tragedy)… the way they have been investigating Cho and his family,” Lee explained.

“The movie ´President´s 7 Hours´ believes that the truth never sinks,” he added.

Critics accuse Lee of failing to be impartial and using his film to deflect attention from growing discontent with the progressive Moon Jae-in government, particularly in the wake of the Cho scandal.

This year the festival is also showcasing another documentary about the Sewol disaster, “Yellow Ribbon”.

For BIFF programmer Kang So-won, the host city´s politics was what motivated them to showcase Lee´s film.

“I personally wanted to show this movie to those who live in Busan, where many of its residents support the main opposition Liberty Korea Party,” Kang told AFP.

“I wanted them to see and witness what we had to go through (under Park´s administration).”