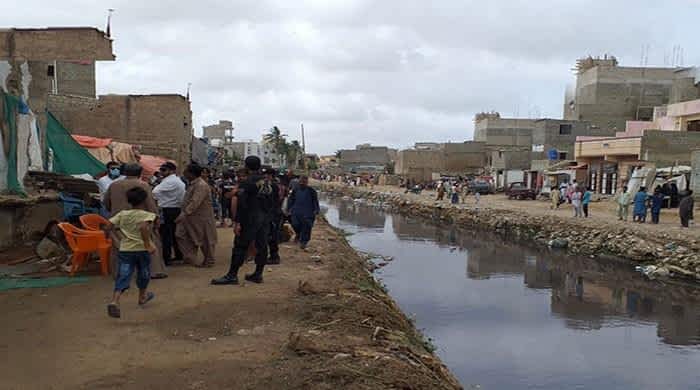 The Karachi Metropolitan Corporation (KMC) on Monday launched an anti-encroachment operation on both the sides of Karachi’s Mehmoodabad Nullah.

In the four-day drive, land on both sides of the city’s major storm water drain would be cleaned of all kinds of encroachments, said anti-encroachment department senior director Bashir Siddiqui

A heavy contingent of police and other law enforcement agencies were deployed in the area during the operation. Speaking to media, Siddiqui said galleries of houses and other concrete structures were being demolished along with the removal of soft encroachments, such as cabins, kiosks, tables and chairs of restaurants and tea shops in the first phase.

The operation, he said, was being carried out by KMC’s anti-encroachment department on the court orders.

Earlier, the operation had been postponed indefinitely on November 19 as residents of the Mehmoodabad neighbourhood had staged a massive and violent protest against the drive.

In the second phase of the operation, Siddiqui explained that 20 per cent area of 57 houses on both the sides of the nullah would be demolished. “The original width of the drain is 50-foot wide, on the surrounding of which the operation is being carried out. All the residents had been notified about the operation beforehand.”

In the seven-kilometre area of the Mehmoodabad nullah, he pointed out, there were 57 houses whose 20 per cent area would be demolished. “However, three to four houses will be completely demolished.”

“Several residents have voluntarily started demolishing 20 per cent of their houses which are on the bank of the nullah. As for the other nullahs of the city, such as the Orangi Town Nullah and the Gujjar Nullah, a similar operation will be conducted.”

The National Disaster Management Authority (NDMA) has undertaken work to clear the Mehmoodabad Nullah from Manzoor Colony’s Fire Brigade Station to Korangi Road, along with the District East’s administration and the KMC. There are scores of houses on both sides of 3.5 kilometres of the nullah which were majorly leased by the KMC itself with a distance of 100, 150 and 200 feet from the bank of the nullah. These houses are notified as katchi abadis of the corporation since 1987.

Last month, Sindh Chief Minister Syed Murad Ali Shah chaired a meeting of the Karachi Coordination Committee to address the city’s development projects, including that of drainage infrastructure, in which Shah had directed the NED University to complete a survey for remodelling of the Mehmoodabad Nullah.

The Karachi Metropolitan Corporation (KMC) has decided to remove the remaining encroachments at the Kidney Hill Park in compliance with the Supreme Court’s directive.

Administrator KMC Laeeq Ahmed on Monday said that the experts would be hired and Google map would also be used to ensure that no encroachments were left in the park and it would be revived to its original position.

The administrator passed these remarks while talking to the concerned officials during his visit to the park. Director General Parks and Horticulture Department Taha Saleem, Director Anti-Encroachment Basheer Siddiqui, Director Land Tariq Siddiqui and other concerned officials were also present during the visit. Ahmed visited the different parts of the park, especially the encroached area, and directed to restore the park to its original position.

Ahmed said the vacated land would be decorated with plants. He also directed the concerned officials to construct boundary walls around water tank, which was being establish for watering of plants, taller to avert any untoward situation. He was informed that illegal residents on the parks land had been issued notices and asked to bulldoze the houses or else the corporation’s anti encroachment department would take action.