Four shot dead in Bangladesh amid clashes between protesters, police 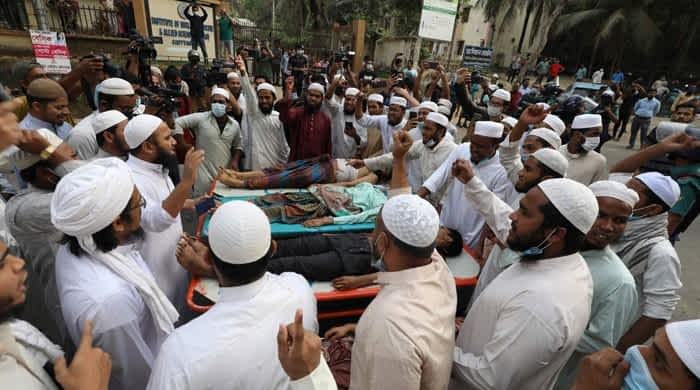 Activists of the Hifazat-e Islam group shout slogans next to the dead bodies of other activists outside the Chittagong medical college hospital in Chittagong on March 26, 2021 following clashes with police during a demonstration against Indian Prime minister Narendra Modi’s visit to Bangladesh. — AFP/Mohammad Minhaj Uddin

It comes as Bangladesh marks 50 years of independence  with celebrations focused on its economic achievements, which activist groups say have been overshadowed by rights abuses.

Police said four bodies of members of Hefazat-e-Islam were brought to Chittagong Medical College Hospital after violence erupted at Hathazari, a rural town where the group’s main leaders are based.

“We got four bodies here. They are all hit with bullets. Three of them are madrasa students and another a tailor,” Alauddin Talukder, a police inspector at the hospital, told AFP.

He said at least four other demonstrators were critically injured but did not say who opened fire.

“They attacked us all of a sudden,” he said, without confirming whether any protesters were killed.

Hathazari is home to one of Bangladesh’s largest madrasas and is the headquarters of the Hefazat, which was formed in 2010.

“There were some 5,000 protesters. They were all Hefazat supporters and they were mostly madrasa students. They were protesting Modi’s visit and police actions against demonstrators in Dhaka,” he said.

He was referring to other smaller clashes at the compound of the country’s largest mosque in central Dhaka after Friday prayers when police fired rubber bullets and tear gas at brick-throwing protesters.

At least nine of these protesters were injured, he said.

Hefazat is known for its nationwide network and large-scale protests demanding blasphemy laws in Bangladesh. In 2013 police clashed with tens of thousands of Hefazat supporters in Dhaka, leaving nearly 50 people dead.

Hefazat aside, a diverse range of Bangladeshi groups — including students, leftist and other outfits — have been staging protests over the last few days against Modi’s visit.

They say Modi stoked religious tensions and incited anti-Muslim violence in the Indian state of Gujarat in 2002, which left about 1,000 people dead. Modi was Gujarat’s chief minister at the time.

On Thursday more than 40 people were injured, including four police officers, during a student demonstration. At least 33 people were detained for violence.

The violence has overshadowed Bangladesh’s celebrations for 50 years of independence.

The former East Pakistan emerged as a new nation in 1971 after a brutal war involving India marked by horrific abuses that Bangladesh says killed as many as three million and displaced many more.

For decades the nation was ravaged by famines, coups and natural disasters but in recent years under Prime Minister Sheikh Hasina it has boomed economically with GDP per head more than quadrupling since 2000.

“The Bangladesh government should not be enabled to use this celebratory moment to lay the groundwork for another 50 years of rights violations, or to hide its abuses by presenting itself on the world stage at variance with how it acts against its own citizens,” a joint statement by nine rights groups, including Human Rights Watch, said.