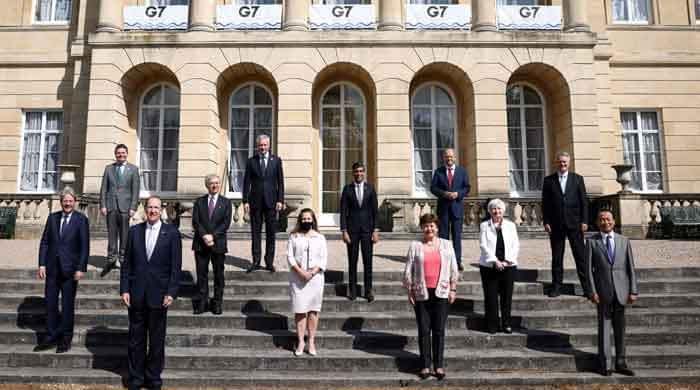 LONDON: Finance ministers from wealthy G7 nations on Saturday endorsed a global minimum corporate tax rate of at least 15%, rallying behind a US-backed plan targeting tech giants and other multinationals accused of not paying enough.

US Treasury Secretary Janet Yellen hailed the “unprecedented commitment”, saying in a statement that a global minimum tax “would end the race to the bottom in corporate taxation”.

Facebook even got behind the move despite the social media giant facing the prospect of having to pay more tax — while non-governmental organizations said it did not go far enough.

Following the two-day gathering in London, the G7 said in a final communique that it will “commit to a global minimum tax of at least 15 percent on a country by country basis”.

The G7 — comprising Britain, Canada, France, Germany, Italy, Japan and the United States — said it hoped to reach a final tax agreement at the July gathering of the expanded G20 finance ministers group.

The G7 also committed to making companies carry out mandatory reporting regarding the climate impact of their investments.

It additionally said it will continue to support “the poorest and most vulnerable countries as they address health and economic challenges associated with COVID-19”.

Regarding the commitment on taxation, Britain’s Treasury noted that “the largest and most profitable multinationals will be required to pay tax in the countries where they operate — and not just where they have their headquarters”.

Welcoming the move, Facebook’s vice president of global affairs Nick Clegg tweeted that the company wanted “the international tax reform process to succeed and recognise this could mean… paying more tax, and in different places”.

British finance minister Rishi Sunak, who chaired the talks held in person after an easing of Covid-19 restrictions, expressed delight at “a historic agreement to reform the global tax system”.

Sunak said the G7 had agreed to make the system “fit for the global digital age”, as he thanked his counterparts for striking “a deal of historic significance”.

The landmark move comes as governments seek to repair finances battered during the pandemic by slashed tax receipts plus vast spending and borrowing.

The London gathering has also prepared the ground for a summit of G7 leaders in Cornwall, southwest England, starting Friday, and which Biden is set to attend.

Momentum has grown behind the US-led plans to limit the ability of multinationals such as tech giants to game the tax system to boost profits, especially at a time when economies around the world are reeling from the impact of the coronavirus outbreak.

“Enterprises can no longer shy away from their fiscal obligations by cunningly transferring their profits to countries with opaque tax structures,” he said, calling the move “bad news for tax havens”.

“It’s a starting point and in the months ahead we will fight for this minimum tax to be the highest possible,” Le Maire said in a video message on Twitter.

Biden had called for a unified minimum corporate tax rate of 15 percent in negotiations with the Organisation for Economic Co-operation and Development and G20.

“It’s about time that some of the world´s most powerful economies force multinational corporations, including tech and pharma giants, to pay their fair share of tax,” said Gabriela Bucher, executive director of Oxfam International.

“However, fixing a global minimum corporate tax rate of just 15% is far too low. It will do little to end the damaging race to the bottom on corporate tax and curtail the widespread use of tax havens.”

Ireland, which has expressed “significant reservations” about Biden’s plan, has at 12.5% one of the lowest corporate tax rates in the world, prompting tech giants such as Facebook and Google to make the eurozone country their European base.

Yellen, holding a press conference following the G7 meet, identified Ireland and China as having concerns regarding a global minimum rate.

“The post-pandemic world must be fairer in particular with regard to international taxation,” she added.

Proponents argue that a minimum tax is necessary to stem competition between countries over who can offer multinationals the lowest rate.

They say that a “race to the bottom” saps precious revenues that could go to government priorities like hospitals and schools.