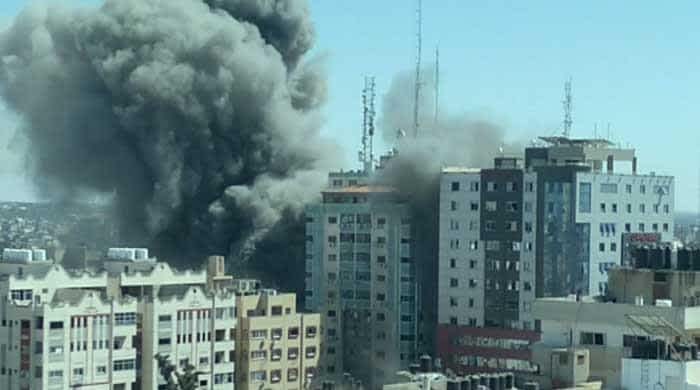 Smoke rises from a building housing the Associated Press and Al Jazeera media officers, moments before it collapses to the ground in Israeli air strikes, in Gaza City May 15, 2021. — Screengrab from live Al Jazeera footage

Israel “destroyed Jala Tower in the Gaza Strip, which contains the Al Jazeera and other international press offices,” Al Jazeera said in a tweet, with an AP journalist saying the army had warned the tower’s owner ahead of the strike.

According to AP: “The airstrike Saturday came roughly an hour after the Israeli military ordered people to evacuate the building. There was no immediate explanation for why the building was targeted. The building houses the Associated Press, Al Jazeera and offices and apartments.”

AP’s Gaza correspondent Fares Akram reported the bombs falling on their office. “We ran down the stairs from the 11th floor and now looking at the building from afar, praying Israeli army would eventually retract,” he tweeted.

AJ producer Lina AlSaafin had tweeted about the warning, saying that their office was given an hour and that colleagues “have already evacuated”. The time stamp on the tweet indicates it was posted at 4:13pm (Pakistan Standard Time).

Al Jazeera broadcast footage showing the building collapsing to the ground after the Israeli air strike, sending up a huge mushroom cloud of dust and debris.

Jawad Mehdi, the owner of the Jala Tower, said an Israeli intelligence officer warned him he had just one hour to ensure the evacuation of the building.

In a phone call with the officer, AFP heard him beg for an extra 10 minutes to allow journalists to retrieve their equipment before leaving.

“Give us ten extra minutes,” he urged, but the officer on the other end of the line refused.

“We are shocked and horrified that the Israeli military would target and destroy the building housing AP’s bureau and other news organizations in Gaza. They have long known the location of our bureau and knew journalists were there. We received a warning that the building would be hit,” the statement read.

Pruitt said AP is seeking information from the Israeli government and are “engaged with the US State Department to try to learn more”.

“This is an incredibly disturbing development. We narrowly avoided a terrible loss of life. A dozen AP journalists and freelancers were inside the building and thankfully we were able to evacuate them in time,” said the statement.

“The world will know less about what is happening in Gaza because of what happened today,” it concluded by saying.

Israeli air and artillery strikes on Gaza since Monday have killed 139 people including 39 children, and wounded 1,000 more, health officials in the coastal enclave say.

‘Israel wants to block the truth from the people of Gaza’

Two days ago, Palestinian journalist Youmna Elsayed was seen in a video posted by TRT World speaking out against Israeli aggression as buildings shook around her after being pounded several times by Israeli air strikes.

Pointing at a building in the near distance behind her, Elsayed says that Al Sharouk Tower is being targeted because it “holds most of the media offices”.

She says the only reason Israel is targeting such a tower — pausing to also name Al Jawhara Tower which also has media offices — is to “block the truth from the people of Gaza, not to bring it out to the world”.