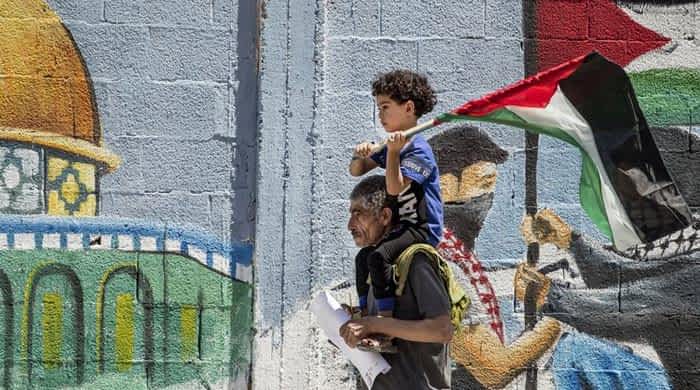 JERUSALEM: A highly anticipated ceasefire between Israel and Hamas that runs the Palestinian Gaza Strip officially came into force early Friday at 2:00am (2300GMT Thursday).

Only celebratory gunfire was heard on Gaza streets, AFP journalists said as truce came into effect three hours after the decision was made by Netanyahu’s cabinet.

Earlier, Israel announced a ceasefire to bring to a close an 11-day military operation in the Gaza Strip.

Prime Minister Benjamin Netanyahu’s office had issued a statement on Thursday that said his Security Cabinet has unilaterally approved the ceasefire proposal put forward by Egypt.

“The political leaders emphasized that the reality on the ground will be that which determines the future of the campaign,” the statement said.

The Egyptian-mediated decision came as the Israeli premier was under increased pressure from the US to halt the offensive.

The Hamas representatives were not available for immediate comment.

Since May 10 when the offensive was launched, Israel has launched hundreds of airstrikes that it says have targeted Hamas’ infrastructure, including a vast tunnel network.

In the southern Gaza town of Rafah, devastating Israeli air strikes turned buildings into clouds of dust and rubble, as an ambulance sped across town to help the wounded.

UN Middle East peace envoy Tor Wennesland was visiting Qatar for talks with Ismail Haniyeh, the political leader of Hamas, as part of an effort to “restore calm,” according to a diplomatic source.

German Chancellor Angela Merkel said “indirect talks” with Hamas were essential to advancing efforts toward an end of hostilities.

“Of course Hamas has to be included, because without Hamas there will be no ceasefire,” Merkel said, who also spoke to Palestinian president Mahmud Abbas Thursday, where they agreed the need “for a speedy ceasefire”.

A senior Hamas official told AFP: “We expect a return to calm in the coming hours, or tomorrow (Friday), but it depends on the cessation of the aggression of the occupation forces in Gaza and Jerusalem.

“But there is nothing definitive for the moment,” added the source, indicating that Qatar, an emirate that hosts Haniyeh and sends financial aid to Gaza, was at the heart of “intense” negotiations.

Israeli strikes on Gaza have killed 232 Palestinians, including 65 children, fighters and another 1,900 wounded, according to the Gaza health ministry, leaving vast areas in rubble and displacing some 120,000 people, according to Hamas authorities.

Overnight, Israel continued to pound Gaza with airstrikes and artillery fire aimed at destroying Hamas tunnels and other infrastructure, the military said.

– ´Sitting in his wheelchair´ –

One Israeli strike on Gaza on Wednesday killed a disabled man, his pregnant wife and their three-year-old child, the enclave´s health ministry said.

“What did my brother do?” the man´s bereaved brother Omar Saleha, 31, told AFP. “He was just sitting in his wheelchair”.

Israel says it takes all steps to avoid civilian casualties, including by phoning residents to warn them of imminent strikes, and blames Hamas for placing weapons and military sites in densely populated areas.

The United States, a key Israel ally, has repeatedly blocked any joint UN Security Council statement calling for a halt to hostilities, including one proposed by France, saying it could undermine de-escalation efforts.

Israel´s bombing campaign has left the two million people of Gaza, which has been under Israeli blockade for 14 years, desperate for relief.

The International Committee of the Red Cross warned that people in both Gaza and Israel “urgently need respite from non-stop hostilities.”

In the West Bank, the army has killed 25 Palestinians since the outbreak of hostilities. The worst death toll in years in the occupied Palestinian territory includes several Palestinians who the Israeli army said had attempted to ram or stab Israeli forces at checkpoints. -Agencies