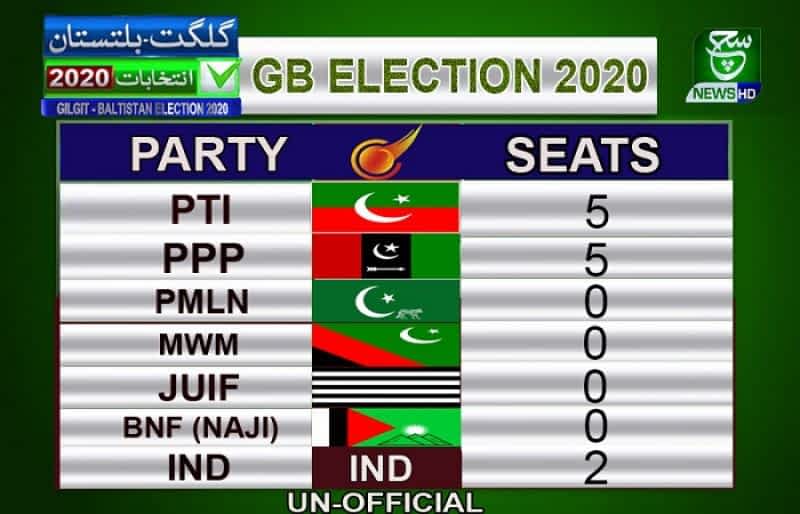 The polling started at 8am and continued till 5pm without any break.

The polling for the general elections of the Gilgit-Baltistan Assembly has ended without any major disruption and counting of votes is currently underway.

The polling started at 8am and continued till 5pm without any break.

All preparations have been finalized to ensure a smooth polling process in Gilgit-Baltistan as the voters will elect members for the legislature today.

A three-pronged contest between the PTI, People’s Party and PML-N is expected as the opinion polls suggesting PTI ahead in the contest.

The registered voters in the area are 745361 and 1160 polling stations have been set up across GB among which 418 has been declared very sensitive and 311 as sensitive.

330 candidates from 23 constituencies will take part in the election. The process of polling will begin at 8:00 am and will continue without any interval till 5 pm. Deployment of staff and materials will be completed by 6 pm in 23 constituencies.

Gilgit Baltistan Election 2020: What voters want in each of the 24 constituencies up for grabs

Meanwhile, polling in constituency GBA-3 has been postponed due to the death of a candidate. The polling will now take place on November 22.

More than 15000 security personnel from GB, Punjab, KPK, Sind and Bolochistan have been sent to their respective polling stations across GB.

GB police chief Dr. Mujeeb ur Rehman has said that the military troops could also be deployed for assistance in the election if required, he added.

Election Commission Gilgit-Baltistan has prohibited to carry mobile phones and other such devices inside the polling stations and within the parameters of 100 meters.

The elections will be held in 23 constituencies in the region, each electing a member to the 3rd Gilgit-Baltistan Legislative Assembly. In the 33 members’ house, six seats are reserved for women and three for technocrats.

Here’s a look at all 24 GB constituencies

Gilgit Division:
The Gilgit region is divided into nine constituencies.

Of a total of 25 candidates, the real contest is expected between the former chief minister and PML-N candidate, Hafiz Hafeezur Rehman and PPP candidate Jamil Ahmed.

The elections in this constituency have been postponed after the death of PTI President Syed Jaffer Shah.

A total of 18 candidates were initially in the run in this constituency.

Total 26 candidates had filed nomination papers in the constituency.

A close fight is expected between PTI’s Obaidullah Baig and Zahoor Karim of PPP.

Total of 12 candidates are contesting the election from this constituency.

Baltistan Division:
The Baltistan region has a population of 538,300 and consists of nine constituencies.

PTI’s Muhammad Ibrahim Sanai, Mushtaq Hussain (Independent) and PPP’s Muhammad Jaffer are contesting from this seat. In this constituency, the PTI candidate is tipped to win the polls.

In this constituency, the main contest is expected between Amina Ansari of PTI, Ghulam Hussain of PML-N, Abdul Hameed (Independent) and Ghulam Ali Haideri of PPP.

A total of five candidates are contesting elections in this constituency and the main contest is expected between PPP’s Muhammad Ismail, PML-Q’s Muhammad Ibrahim Taban and PTI’s Syed Shamsuddin.

Diamer Division:
The Diamer region has total of six seats