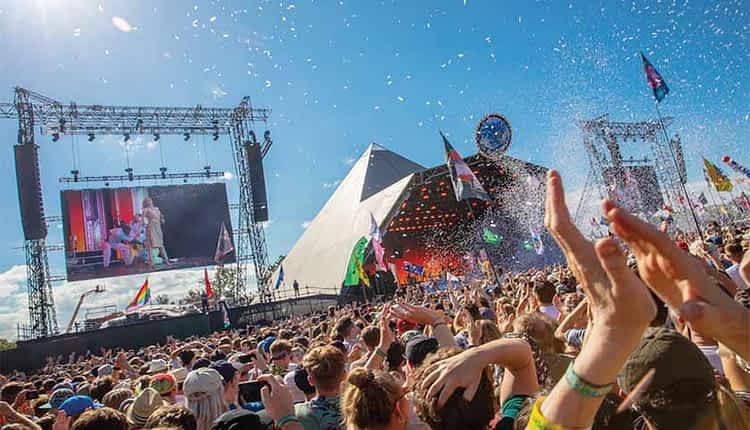 As whole world suffers on account of the pandemic, the performing arts have been one of the worst hit sectors. However, ways and means have been devised to make a virtue of this situation that has now been there for more than a year.

In Europe, major festivals and concerts have been put on the digital mat: the Glastonbury Festival and the Eurovision Music contest. The Glastonbury Festival is perhaps best known for the air of revelry that it permeates. Crowds gather in the open air and are exposed to the elements. The reliving of the ways of the Dionysian environment is regenerated. The crowd, caring little for their appearances and claddings, just wallow in the mud and mire and brave the gales and the rain to recreate the mood of revelry as it had been in times of yore. Accompanying all this is the ritual of music and dance, as the primal expressions of letting go and abandonment.

Besides the massive failure and breakdown of the streaming services and other technical failings, which are becoming a regular feature, the digital version must have been a great come down because the primary function and role of the festival has been undermined. The primary role is for the people to get together and revel in the environs of the nature as it existed in times when the bond between the two was still integral and not divided so much as to pitch one against the other.

I wonder what people must have felt sitting at home watching or viewing all this on their screens of whatever digital denomination was available. The set and the environs above all are human-made shelters, a refuge against the uncertainty of the elements and the very act of defying this has been forced upon the people. It is no longer the exposure to the uncertainties of the weather, the mud and mire and the coexistence with the trees, grass and foliage but a virtual reliving of all this in the sanity and safety of the homes. The short opening that people had granted themselves of being rebellious against the certainties of the manmade world was taken away from them in this virtual recreation.

It may be that the virtual reliving is just a reminder that the world and the exposure to the instinctual existence and its essentialness has been taken away. Even if one had to live, it had to be virtual life. The opportunity of it taking place even for a short time has been robbed. The escape from the constructed, manicured existence into the waywardness of the primal urges has been stolen from the civilisation that wants to go back and experience the essential primariness of existence.

The Eurovision music concert, too, was a whole contest without the audiences. It has been primarily the interaction with the audiences that generates the excitement and the necessary feedback to egg the performances. Performing to an empty man-made environment like the sets meant to compensate for the lack of the essentials is supposed to cater to the presence of human beings. The contest was like the performers performing to one another. They yearned for human preference and finding none, they turned to the fellow performers for the satisfaction.

As it is, the Eurovision is a medley of hi-tech digital glamour mixed with the liveliness of music and the two works perhaps together in the presence of the audience, but without the teeming crowds the contest just becomes a digital razzle dazzle without the other essential component. It petered out into some kind of a display of invasive technology and a parade of the achievements without jelling into the fluidity of the human expression through art. As it is, the digital or the technical side is so pervasive that it always wants to overpower the primary human expression, which to the contrary, is relatively more stable and unchanging in comparison to the racing away of the technical inputs.

It appeared mostly like a spectacle edging the human content out. The people sitting at their homes experienced only its vicariousness. All the time the grappling with the streaming services and its poor connections and breakdowns reminds one of the frailty of humanness rather than the perfection of a science-driven world.

The concert held in Barceleno was another way out where the audiences were supposed to be vaccinated and come with proof that they had not tested positive for the virus. To get in, one couldn’t just turn up at the Sant Jordi stadium a few minutes before the start and get a ticket at the door. Fans had to download an app, input their contact details and book a time for a rapid Covid test on the day of the concert.

People testing negative got a code to gain entrance to the building, while those who tested positive were offered a refund. Inside, masks were mandatory and the public was divided in three areas holding about 1,600 people each. Five thousand electrified fans sang, jumped and danced to indie pop hits. It might be any Saturday night gig in 2019, if it weren’t for the masks, the whiff of the sanitiser and the tickets proving a negative Covid-19 test.

Are we close to presenting in whatever limited digital form our big festivals? It may have happened with conferences and seminars but not with huge gatherings and one wonders when this will happen and what will be its quality, subsequent fallout and feedback.

Arjun Kapoor claps back against body shamers: ‘You should not try’