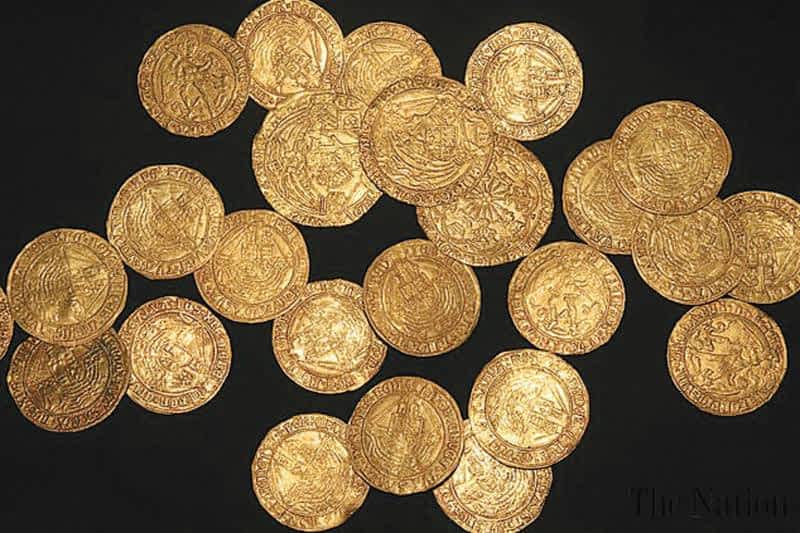 ISLAMABAD   –  A hoard of Tudor gold coins featuring the initials of Henry VIII’s wives are among the British treasures found in lockdown, the British Museum has revealed. The 15th Century gold hoard, which also included one silver coin, were found in the New Forest area of Hampshire by people pulling weeds in their garden. They separately feature the initials of the first names of Henry VIII’s first three wives – Catherine of Aragon, Anne Boleyn and Jane Seymour.

More than 47,000 discoveries have been registered with the British Museum’s Portable Antiquities Scheme (PAS) so far this year – many from garden-based discoveries. In the first lockdown alone, starting in March, the scheme reported 6,251 finds. This was when metal detecting was prohibited in fields, so many people turned to their own gardens. The finds also included a Roman furniture fitting depicting the god Oceanus and a suspected medieval forgery of a bishop’s seal matrix. In total a hoard of 63 gold coins and one silver coin, covering the reigns of Edward IV through to Henry VIII, were dug up by the New Forest family. Dating from the Tudor period, the hoard includes four coins from Henry VIII’s reign, unusually featuring the initials of his wives – ‘K’ for Catherine of Aragon, ‘A’ for Anne Boleyn and ‘I’ for Jane Seymour, the British Museum said.