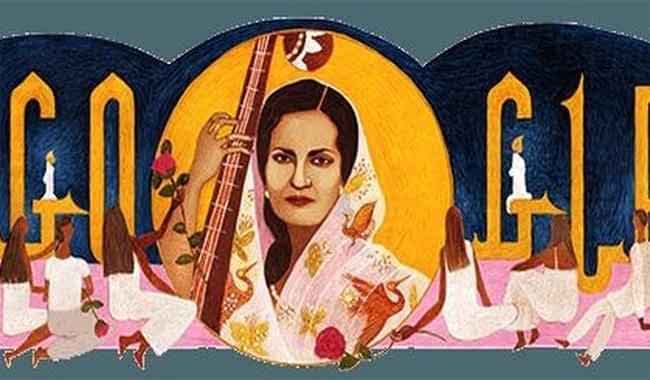 Google on Saturday posted a special doodle on its home page to mark the 103rd birth anniversary of ‘Mallika-e-Ghazal ‘ Begum Akhtar. The doodle shows her playing a sitar at the centre, with fans all around applauding her art.

Born on October 7, 1914, she was a renowned Indian singer of Ghazal, Dadra, and Thumri genres of Hindustani classical music.

Her journey in the world of music began in a salon in Lucknow as a young teenager – put up by her mother Mushtari bai, also a tawaif and soon within a short span of time, she became an artiste to reckon with. She became so famous for her musical prowess that only the distinguished were allowed entry to her mehfils.

At a tender age, she dabbled with many creative career options right from acting in theatre in the 1920s in Kolkata, to having a short stint in films as a songstress and an actor. She later on went in for a socially accepted life, when she tied the knot with barrister Ishtiaq Ahmed Abbasi, following which she went onto, becomes the Mallika-e-Ghazal we all know her as, today.

She was the pioneer of this genre and paved the way for many eminent artistes to follow such as Jigar Moradabadi, Kaifi Azmi and Shakeel Badayuni.

Begum Akhtar passed away in Ahmedabad on 30 October, 1974. She was in the city for a concert and fell ill while staging a performace. The Legendary classical singer was awarded Padma Shri, Sangeet Natak Akademi Award and Padma Bhushan.

world´s most venomous scorpion in action