Google to invest $4.5 billion in digital unit of India’s Reliance 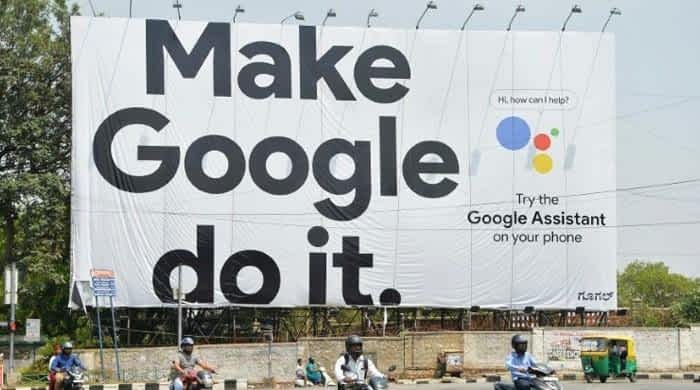 Google is among the global tech giants vying for a share of India’s massive market. — AFP/Files

MUMBAI: Google will buy a $4.5 billion stake in Reliance’s digital unit and jointly develop an entry-level smartphone with the Indian conglomerate, the two companies said Wednesday as global tech giants race to grab a share of the country’s massive market.

“We are delighted to welcome a household name in India and worldwide, Google, and have signed a binding partnership and investment agreement,” which will give the US firm a 7.7 percent stake in Jio Platforms, Mukesh Ambani told shareholders at the oil-to-telecom behemoth’s annual meeting.

The two firms will also develop “an Android-based smartphone operating system”, Ambani said, adding: “India is at the doorstep of (the) 5G era.”

“With cheap smartphones and data, millions of Indians came online and Jio had a big role in it. Our goal is to bring a billion Indians online,” Google’s chief executive Sunder Pichai said in a pre-recorded video message released at the meeting.

Major players including Facebook, Intel and others have already ploughed some $15 billion into Jio Platforms this year, as Ambani — India’s richest man — seeks to take on US giants Amazon and Walmart in India’s growing online retail sector.

The tycoon, who upended India’s telecom sector after launching the Jio mobile service in 2016, is looking to roll out an e-commerce initiative that will tap into its huge 388-million-strong subscriber base.

Jio’s mobile offering clobbered the competition, offering huge discounts on its services and forcing rival firms to crash out after they were unable to keep up.

In recent months Ambani has raised more than $22 billion in a rights issue and through selling stakes in Jio Platforms, and announced last month that Reliance was now net debt free as a result.

Google this week said it would invest $10 billion in India over the next five to seven years.

Foreign firms have spent tens of billions of dollars in India in recent years as they fight for a piece of the Asian giant’s burgeoning digital economy.