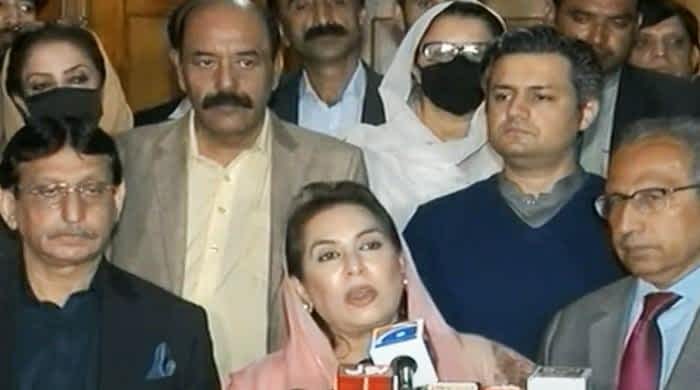 The federal government’s allies, in a late-night press conference, have assured to back it in the upcoming March 3 Senate election.

The ministers’ comments came after a meeting was held at Minister for Defence Production Zubaida Jalal’s residence. Following the meeting, Minister for Information Technology and Telecommunication Syed Amin-ul-Haque, Abdul Hafeez Shaikh, and other federal ministers addressed a joint presser.

Haque said the MQM-P, along with other allies of the government, would stand with PTI in the upcoming Senate elections.

The federal government’s allies are on the same page, including the Grand Democratic Alliance (GDA), Pakistan Muslim League-Quaid (PML-Q), Balochistan Awami Party (BAP), and the MQM-P, he said.

– For a sustainable democracy

The minister said that despite the MQM-P’s reservations with the PTI, it had decided to support the ruling party in the elections for the upper house.

Lashing out at the PPP, the federal minister said that the ‘corrupt’ Sindh government had ‘destroyed’ the province. “In 13 years, they did not provide 13 gallons of water for Karachi and neither did they give 13 buses for Karachi.”

“I want to make it clear to the Sindh government; no one will be allowed to interfere in Karachi’s development,” he warned, adding that all of MQM-P’s provincial lawmakers were standing behind the PTI.

Federal Minister for Inter-Provincial Coordination Fehmida Mirza said the government was passing ordinances as it was facing hurdles in the National Assembly.

“If we want to close the doors of corruption, then there is a need for proportionate representation,” the minister said, adding that all of the government’s allies had decided to support it in the polls.

Hafeez Shaikh, addressing the presser, said the government want to ensure that transparent polls take place “We want the members of [national and provincial] assemblies to live up to the aspirations of the people.”

“We (government and its allies) all stand united,” he added.