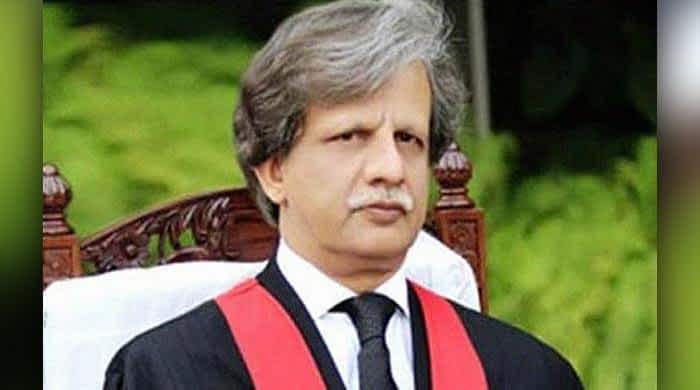 ISLAMABAD: The PTI-led federal government has appointed a former judge of the Supreme Court of Pakistan, retired Justice Sheikh Azmat Saeed, as the head of the inquiry committee tasked to probe the Broadsheet LLC scandal.

Information and Broadcasting Minister Senator Shibli Faraz confirmed the development on Twitter, saying the retired judge “will head the inquiry committee on the Broadsheet case”.

The former apex court judge would also be consulted on the appointment of other members of the Broadsheet probe committee.

The former apex court judge would also be consulted on the appointment of other members of the Broadsheet probe committee.

An important fact to note is that Justice Saeed was part of the five-member larger Supreme Court bench that disqualified Nawaz Sharif.

Faraz had revealed a couple of days ago that Prime Minister Imran Khan has constituted a ministerial committee to probe the Broadsheet LLC scandal and tasked it to present its findings in 45 days.

Sources had informed Geo News at the time that PM Imran Khan had directed the three-member ministerial committee to make public the facts in the scandal involving the London-based asset recovery firm and the National Accountability Bureau (NAB).

PM Imran Khan had taken notice of the Broadsheet scandal after court documents revealed that Pakistan’s anti-graft watchdog had made a deliberate decision to disregard financial damages that may be caused to the said company by entering into a settlement with an unauthorised individual and paid around $1.5 million to a fake firm.

The arbitration court that heard the case — Broadsheet LLC vs. The Islamic Republic of Pakistan and the National Accountability Bureau — was chaired by Sir Anthony Evans. The court’s ruling titled Part Final Award (Liability issues) was handed down in August 2016 under the Chartered Institute of Arbitrators, Case No. 12912001.

The case details the whole saga from the NAB’s establishment to the signing and — three years later — rescinding the agreement with Broadsheet, a breach of contract, illegal payments from Pakistan to wrong entities; and all that led the court to ascertain that the anti-corruption body was involved in intentional wrongdoings.

The NAB and Broadsheet LLC had signed the agreement in 1999, which was breached by Pakistan in October 2003.

Judgment documents had revealed what the arbitration court concluded, that the claimant — Broadsheet LLC — was entitled to recover damages from the respondents — the Islamic Republic of Pakistan and the NAB — for the “tort of conspiring to cause unlawful economic loss to the Claimant by entering into the Settlement Agreement dated 20 May 2008 with Mr. James and companies controlled by him and/or in making payments to him or them thereunder”.