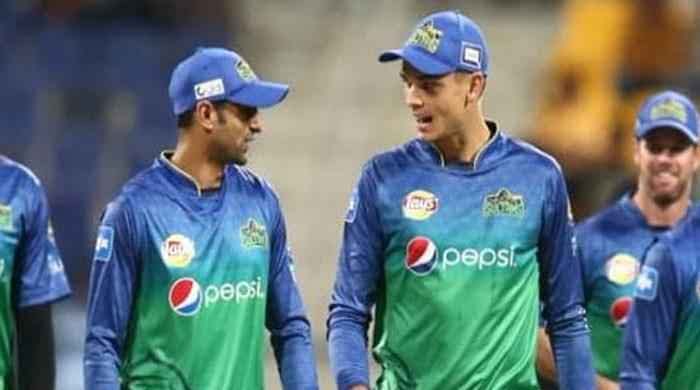 KARACHI: Young Australia off-spinner Chris Green is confident fans will paint Karachi red for the last leg of the Pakistan Super League resuming from Saturday as the league shifts to Pakistan after the first 26 matches were held in the United Arab Emirates.

The 25-year-old, who is trying to make his way to the Australia team by playing leagues around the world, will have a short stay in Karachi as his team Multan Sultans failed to make the play-offs, but that did not douse the fire in Green.

“Having experienced the play-offs last year in Lahore and the electric atmosphere, I am looking forward to visiting Karachi for the first time this season,” Green said.

“Unfortunately, we haven’t made to the play-offs, so my stay will be very short lived, but I think it’s great to see more and more games, teams and players willing to go and play in Pakistan. You can see the passion and excitement the people have for cricket and to be a part of that, truly is something special.”

Green has played for Guyana Amazon Warriors in the Caribbean league and was part of Lahore Qalandars in the first two seasons of the PSL. He represents Sydney Thunder in the Big Bash league.

“The PSL is a very strong competition. I think it’s great that the PCB has an international cricket free window to allow the best players in Pakistan play and compete in the PSL. This adds to the depth of all six teams and when you add the high quality overseas players the tournament attracts into the mix, it can generate some exciting match-ups. “

Green said he has always enjoyed playing in the PSL.

“This is my third season of the PSL and I have always enjoy my experience in what is such a strong and growing competition. The obvious change from year to year for me personally is getting my opportunity to play this season with Multan and showcase my skills in effort to contribute to the team success,” said the spinner.

Green said he learnt a lot from Pakistan greats like Shahid Afridi and Shoaib Malik in the Multan Sultans’ team.

“We couldn’t achieve the desired results in this competition with some close games not falling our way, but I have learnt so much about my game playing alongside the likes of Shoaib Malik and Shahid Afridi,” said Green.

Green said he adjust his bowling as per the conditions.

New trailer of video game-inspired ‘Tomb Raider’ is out now