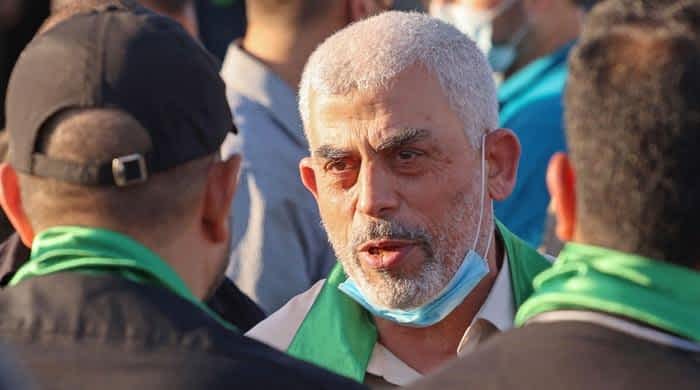 Yahya Sinwar, leader of the Palestinian Hamas movement, greets supporters during a rally in Gaza City on May 24, 2021. Photo: AFP

GAZA CITY: Palestinian group Hamas, which has been ruling Gaza,  vowed Wednesday not to touch “a single cent” of international aid being given to rebuild the war-torn enclave after its war with Israel.

The head of the group’s political wing, Yahya Sinwar, promised a “transparent and impartial” distribution of aid in the aftermath of the 11 days of deadly conflict.

Diplomatic efforts are underway to solidify a fragile Egypt-brokered truce that halted the fighting, with plans to rebuild the Gaza Strip where Israeli air strikes damaged infrastructure and levelled buildings.

“We welcome any international or Arab effort to rebuild the Gaza Strip,” Sinwar told a news conference in Gaza City.

“I affirm our commitment not to take a single cent intended for reconstruction and humanitarian efforts,” he said. “We have never taken a cent in the past.”

US Secretary of State Antony Blinken said Wednesday that all aid would be “administered in a way that benefits the Palestinian people — not Hamas”, which Washington considers a terrorist group.

Israel — which has enforced a land and maritime blockade on the Palestinian enclave since 2007 — accuses the group of diverting international aid to military ends.

An Israeli defence ministry official said all funds to Gaza would have to flow through an international “mechanism” to reach people directly.

The latest conflict erupted on May 10 when Hamas sent volleys of rocket fire towards Israel in solidarity with hundreds of Palestinians injured in clashes with Israeli security forces inside the Al-Aqsa mosque compound.

That violence in occupied east Jerusalem mushroomed out of protests over the potential expulsion of Palestinians from their homes in favour of Jewish settlers.

Between May 10 and May 21, Israeli air strikes and artillery fire killed 254 Palestinians, including 66 children and some fighters, authorities in Gaza say.

Rocket and other fire from Gaza claimed 12 lives in Israel, including one child, one Arab-Israeli teenager and an Israeli soldier, according to police.