Health to get Rs172 billion in next fiscal year, 29.49pc more than last year’s allocation 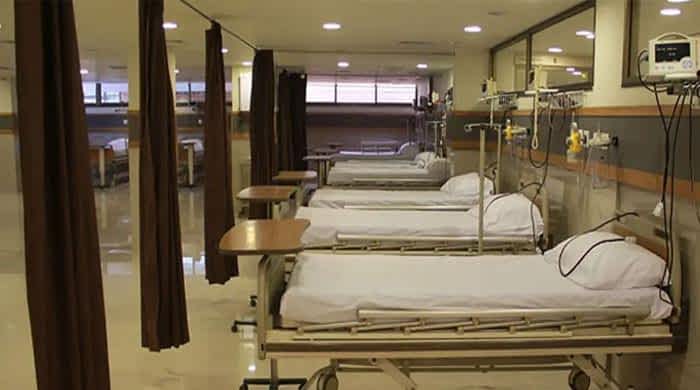 Increasing the budgetary allocation for health by 29.49 per cent from Rs132.884 billion to Rs172 billion in the next fiscal year, Chief Minister Syed Murad Ali Shah said Tuesday Rs24.73 billion had also been allocated to combat the Covid-19 pandemic, including Rs17.22 billion for provision of health risk allowance.

“The next financial year will witness an increase of around 30 per cent in the total allocation for the health sector, including medical education. An allocation of Rs172 billion has been proposed as against an allocation of Rs132.88 billion in 2020-21, while 18.5 billion rupees have been pitched for the ADP of health,” he announced in his budget speech at the Sindh Assembly amid chaos due to a protest by the opposition.

He maintained that the provincial government had allocated Rs7.6 billion in the next financial year with an overall rise of 10 per cent for nine vertical programs to combat and control polio, TB, HIV and Aids, Lady Health Workers Program, hepatitis control, and Expanded Program for Immunisation and others.

Furthermore, Rs6.1 billion has been allocated to the NICVD, Karachi, while Rs6.4 billion has been earmarked to the SICVD (Lyari Karachi, Larkana, Sehwan, Hyderabad, Sukkur, T.M. Khan, Shaheed Benaziabad, Khairpur, Mithi and Karachi).

For the next financial year, for the development side, the CM said, they had planned to start a natural calamities program in Sindh, which would be co-financed by the federal government on a 50 per cent share basis, and both the governments would provide Rs10.411 billion each and the estimated cost would be Rs20.822 billion.

“We would establish Bio Safety Level-Three (BSL-III) Lab at the Sindh Infectious Disease Hospital Karachi, provision of Linear Accelerator with integrated High Field MRI System at the DUHS Karachi and the provision as well as installation of Onsite Oxygen Generation/ Medical Gases Plants at tertiary care hospitals in Sindh,” he added.

The government has also planned establishment of the Sindh Institute of Child Health (SICH) with MNCH Services at Korangi 5, in addition to an Accident Emergency Centre on the Motorway at the Thano Bola Khan Interchange and at Hawks Bay, Karachi.

In addition to health services, an overall 45 per cent increase of Rs2.846 billion has been proposed for medical education by enhancing its budget from Rs6.294 billion to Rs9.141 billion in 2021-22.

The chief minister announced that 12 colleges of nursing were proposed to be adopted on the recurring side by transferring 302 posts and by creating 216 new posts with financial implications of Rs466.600 million. He added 400 new slots of PGs were created by enhancing slots of PGs from 1,400 to 1,800 in Sindh.