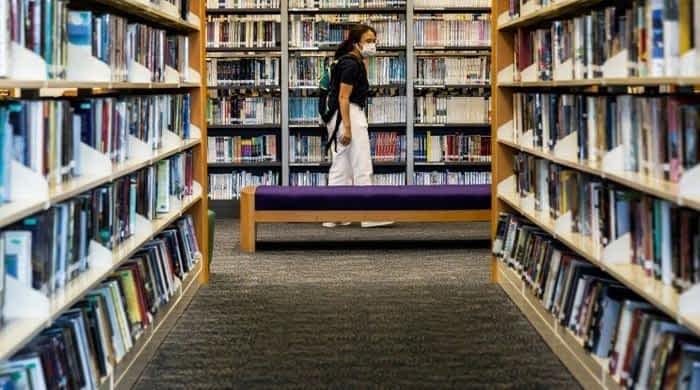 Hong Kong activist Joshua Wong said he thinks books were removed from libraries because of the new security law. — AFP/FilesHong Kong has been removed from an annual index of the world´s freest economies.
The think-tank that compiles the league table said the city was now directly controlled by Beijing.
Over the last 26 years Hong Kong topped the table for all but one year.

HONGKONG: Hong Kong has been removed from an annual index of the world´s freest economies because the think-tank that compiles the league table said the city was now directly controlled by Beijing.

The announcement is a reputational blow for Hong Kong and comes as Beijing ramps up its bid to quash dissent after huge and sometimes violent pro-democracy demonstrations in 2019.

The Heritage Foundation, a conservative US think-tank, publishes an annual Index of Economic Freedom ranking countries and territories for how business-friendly their regulations and laws are.

Over the last 26 years Hong Kong topped the table for all but one year — a source of pride to the city´s government which often used the accolade in its official press releases and investment brochures.

But when the 2021 ranking is released later on Thursday, Hong Kong will not appear because the report´s authors believe the city is no longer independent enough of Beijing to justify separate inclusion.

“The loss of political freedom and autonomy suffered by Hong Kong over the past two years has made that city almost indistinguishable in many respects from other major Chinese commercial centres like Shanghai and Beijing,” Edwin J. Feulner, the founder of the Heritage Foundation, wrote in the Wall Street Journal on Wednesday.

“[Hong Kong´s] ties to Beijing are increasingly forged in steel,” Feulner added, while its pre-handover “traditions of English common law, freedom of speech, and democracy have weakened significantly”.

The Heritage Foundation is one of the major policy think-tanks that influences fiscal conservatives in the United States.

Feulner is also a vocal critic of Beijing and chairman of the Victims of Communism Memorial Foundation.

Last year the city fell from the top spot for the first time, replaced by rival Singapore, after Beijing imposed a sweeping national security law on Hong Kong.

Beijing says the law was needed to restore stability.

But it has also altered Hong Kong´s legislative and judicial relationship with the authoritarian mainland.

That has created some jitters within the international business community, especially as Beijing falls out with a growing list of western powers.