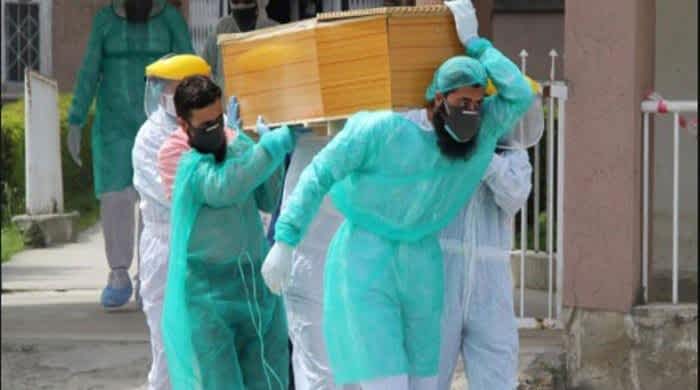 The number of people who are being hospitalised in Sindh because of Covid-19 as well as of those who are being declared critically ill have been constantly on the rise.

The number of people who have been hospitalised in the past 24 hours has increased from 610 to 671, with the number of those declared critically ill rising from 545 to 619.

A senior physician at the Sindh Institute of Urology & Transplantation said that during this wave, not only are the patients on life support dying but those on high or low oxygen are also breathing their last during treatment. “And many of those who are observing self-isolation at home, they are also dying because of the complications of the viral infection as well as of the involvement of comorbidities.”

Thirteen more people have died due to Covid-19 and another 1,382 cases have been reported during the past 24 hours in Sindh, with the death toll due to the viral disease reaching 2,858 in the province.

Chief Minister Syed Murad Ali Shah said in his daily situation report on the health emergency on Tuesday that 11,738 samples were tested in the past 24 hours, resulting in 1,382 people, or 12 per cent of those who were screened, being diagnosed with Covid-19.

The provincial government has so far conducted 1,917,813 tests, which have resulted in 166,033 positive cases, which means that nine per cent of those screened have been found to be infected, he added.

He said that 16,218 patients are currently under treatment: 15,535 in self-isolation at home, 12 at isolation centres and 671 at hospitals, while 619 patients are in critical condition, of whom 74 are on life support.

He added that 591 more people have recovered during the past 24 hours, increasing the number of cured patients to 146,957, which shows the recovery rate has fallen to 88.5

As for the other divisions of the province, Hyderabad has reported 70 new cases, Sujawal 49, Dadu 21, Thatta 18, Naushehroferoze and Ghotki 12 each, Umerkot and Jamshoro 11 each, Tando Allahyar and Mirpurkhas 10 each, Shaheed Benazirabad six, Larkana three, Matiari and Tharparkar two each, and Badin, Jacobabad, Kashmore, Sanghar, Sukkur and Tando Mohammad Khan one each, he added.

families from the virus outbreak.

Given a surge in Covid-19 cases, the Sindh government has imposed a lockdown throughout the province until January 31, 2021.

As per a notification of the home department, it is mandatory to wear a face mask at all government and private offices as well as public places. A fine will be imposed on people for not covering the face.

Indoor weddings have been banned. Only outdoor wedding ceremonies are allowed with a maximum of 200 attendees until 9pm. No buffet service is allowed; however, food in packed boxes can be served at weddings.

All public and private offices have been ordered to ask fifty per cent staff to work from home. A relatively broader smart lockdown, based on hotspot areas, are to be imposed by commissioners and deputy commissioners under the Sindh Epidemic Diseases Act 2014.

The home office has ordered the closure of all indoor gatherings, indoor places, indoor business centres, indoor gyms, indoor sports facilities, cinemas, theatres and shrines. All business will close, except for essential services, on Friday and Sunday.

The timing for businesses and markets are from 6am to 6pm on weekdays, while they will remain close on weekends. The restaurants can only serve food in the air and they will close at 10pm for takeaways and home delivery.

In another notification, the home department announced closing all shrines in Sindh under the administrative control of the Auqaf Department. It said no events or gatherings were allowed at shrines until 31 January.