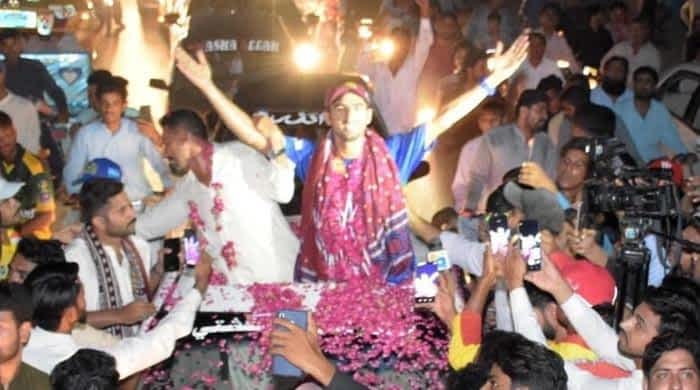 A huge crowd turned up in Larkana on Saturday as hometown hero Shahnawaz Dahani returned to the city, following his brilliant performance in the PSL 2021.

The right-arm fast bowler has witnessed a surge in popularity after taking the most number of wickets in the PSL 2021. Dahani took an impressive 20 wickets throughout the tournament to stay ahead of the rest of the bowlers.

For his outstanding achievements, he was deemed Best Emerging Player and Best Bowler of the tournament.

The hometown hero was showered with rose petals as hundreds surrounded his car Saturday night to show their love and appreciation for him.

Dahani took to Twitter to thank the people for standing in the scorching heat of Larkana for several hours just to pay tribute to him.

“WaTu Izzu Man Tasha-o WaTu Zillu Man Tasha. How can I thank people who in the scorching heat of Larkana, waited for hours to welcome me? Simply it was a great feeling,” he tweeted.

The bowler vowed never to disappoint his fans.

“Thank you all who came to show their love, respect, and support for me. InshAllah, I will always make you proud of me,” he added.

In an interview with Geo.tv earlier, the bowler had said it remains his dream to play for Pakistan in World Cup 2022.

“Playing in the PSL has made me a different cricketer. I entered this league as an emerging talent and spent time with some of the best professionals of the game. The main support this league provided me was to overcome my fear and nervousness,” the pacer had said ahead of the final against Peshawar Zalmi.

“I can now bowl against anyone and enter the ground with full confidence and perform bravely,” the fast bowler had said.

Dahani said there can’t be anything bigger for a sportsman than to represent his country in a World Cup.

“To play in the World Cup for Pakistan is my dream,” he had said.

“If I get a chance to play in the T20 World Cup, I assure you that I will give my utmost to prove my mettle and show to the world that I am among the best,” he had said confidently.