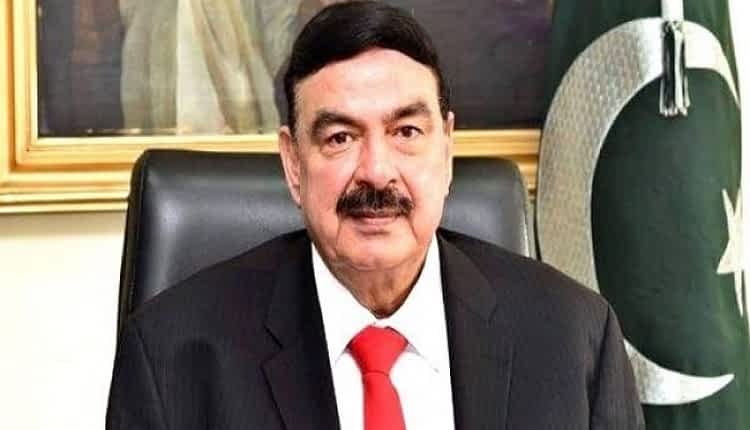 Federal Minister for Interior Sheikh Rasheed Ahmed on Sunday said that Prime Minister Imran Khan regrets that former prime minister Nawaz Sharif was able to escape the clutches of the law by leaving Pakistan for Britain.

He said that Nawaz deceived the government and went abroad using “fake medical reports” and the prime minister has great sorrow over this but the government stopped PML-N President Shahbaz Sharif from leaving abroad and put his name on the Exit Control List (ECL).
Rasheed was speaking to the media after inaugurating a coronavirus vaccination facility at CDA Medical Centre, Qazafi Chowk, G-9 Markaz, in Islamabad.

He said a person whose name was included in the ECL could challenge the decision in 15 days but Shahbaz Sharif did not challenge the interior ministry’s decision.

Rasheed went on to say that PM Imran Khan was lucky to have such an “incompetent” and “sluggish” Opposition.
The Interior Minister thanked the World Health Organisation (WHO) for extending its full support to Pakistan in the fight against coronavirus.

Timely decisions taken by Prime Minister Imran Khan helped Islamabad in containing coronavirus, he said, adding that the vaccination process in Pakistan was better as compared to other countries of the region as a large number of people were now visiting vaccination centres after awareness.

Congratulating the NCOC team for ensuring smooth supply of vaccine, the minister said that NCOC ensured supply of vaccine as compared to India where notices were displayed that no vaccine available for seven days in many cities.

He said that vaccines in Pakistan, on the other hand, were widely available and that the Sinopharm vaccine was one of the best vaccines available in the world.

He said that he salutes the Chinese government for its cooperation with Pakistan in combating the pandemic.

Discussing the recognition of the Sinopharm vaccine by Saudia Arabia and Europe, the minister said that the premier had stated in the recent federal cabinet meeting that he would personally talk to the leaders of the concerned countries to accommodate this.

Rasheed said that the government was going to announce the federal budget this month and that he hopes that the salary and pension of employees would be significantly increased.

He said that the Jahangir Tareen group would support the government in the budget session.

The minister said that Islamabad’s street crime would soon be curbed with the new Eagle Squad.

He said that 150 mobile Eagle Squads would be attached with the Safe City Project to make Islamabad a safe zone.

Rasheed said currently Eagle Squads have only four mobile vans but 16 more would be added in the upcoming budget.

He added that the police was being strengthened to improve its capacity and operations.

832 corona patients recovered in hospitals of Punjab in 24 hours