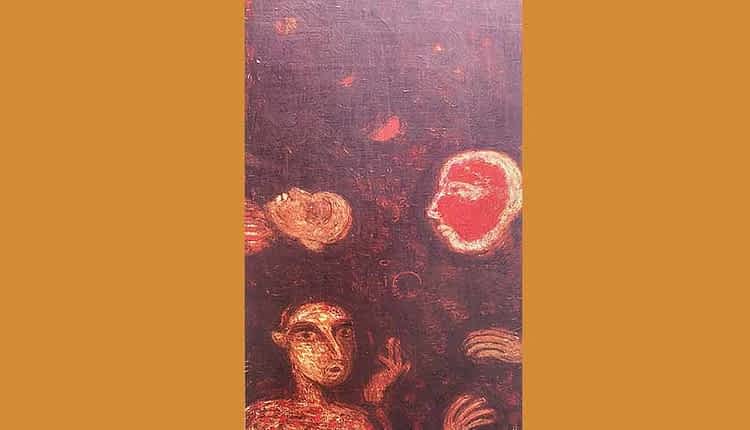 No Pakistani artist has deserved a monograph as much as Meher Afroz. Not only because she is one of the leading names in Pakistani art, but also because her work is heavily embedded into the book; thus, a book on her art is a well-awaited homage, made possible by Le Tropical Pvt Ltd. Besides its editor, Nilofur Farrukh, 15 other contributors are included in A Beautiful Despair: The Art and Life of Meher Afroz, published in 2020.

A book, rather a page, is essential in Meher Afroz’s art for several reasons. The immediate one is her background as a printmaker (highlighted by Romilla Kareem in her text, Between Metal and Paper: Works of a Master Printmaker). Mehr Afroz, at the beginning of her career in Pakistan, was recognised primarily as a printmaker, winning an award in the category from 1977 to 1985, at the National Exhibitions held in Islamabad. To some this aspect of her art practice may sound like a minor detail, but her early exposure to the process was pivotal in formulating her aesthetics.

Printmaking, especially etching, requires that the artist alter a metal surface using tools and acids. What is achieved at the end is a paper – bearing an inked impression of that metallic sheet. Along with the intended content and subject, the surface quality – made possible through incising, immersion in acid, pressure from the printing press – contributes to the image. In some instances, the image. This is how paper, with its withered and crumpled appearance, became a significant and desirable pictorial entity for Afroz. In her essay, Be: Longing, Savita Apte comments that printmaking, “where recent formulations are layered over, faded or partially erased earlier ones, has also been interpreted as a metaphor for Meher’s gradual, though open-hearted assimilation of a new national identity”.

Besides the national identity, perhaps the technique also contributed towards her quest to search a lost past. More than personal, it is cultural and religious heritage. Apte writes about the recital of marsiya and soz during Muharram in Lucknow. In these literary forms, a devotee recalls, and relives the martyrdom of Imam Hussain (with whom Allah was pleased) and his family, fourteen hundred years ago. A great contemporary reciter manages to create the historic incident in the minds of his listeners through his choice of words and the control of voice.

This experience, of Muharram, is reflected in Afroz’s yearning to reclaim the past. To start with her prints with Indus Valley Civilisation’s script, these later incorporated elements of a collective memory, grief and emotion – echoing Iqbal’s line: Mairi Tamam Sarguzasht Khoye Huwon Ki Justaju.

Meher Afroz resurrects a bygone era in her images and with their titles like Zindaan (prison) and Aseer (captive) which may refer to female members of Imam Hussain’s family/camp (with whom Allah was pleased) who were taken prisoners after the massacre in Karbala; besides suggesting the plight of humans in present situations. Zehra Hamdani Mirza, in her essay A Fire in the Moonlight, elaborates this: “Meher’s world view is sculpted by her spiritual centre. Karbala lies fixed in the firmament, like the sun and the moon. It shines in her motifs, rhetoric, and idea of the sublime. Her burnished works in metal, silver and gold evoke alams”.

There are visual links with the Shia iconography, but more than these, her preference for darker hues, tarnished surfaces, cuts, scratches, slits, piercings (reminiscent of a print or a plate) act as a metaphor for painful past and equally painful present. Like words on a page, which are mere lines, but signify people, objects, ideas, events – shapes, marks, and textures in Meher Afroz’s works suggest meanings.

The physicality of her imagery and its strong tactile sensibility reinforces her concerns. Shirts, coats and cloaks, with the gap/ghost of a human form, without its presence, body and features (Poshak series), are what Anoli Perera in her text, A Palimpsest’s Quest, calls “a ‘loss’ that is brought about with displacement of place… and also is a ‘loss’ that has occurred with the displacement of time”. According to Perera, “Poshak reminds us of the external skin we adorn ourselves with, to survive in the competitive world which becomes a futile exercise when everything is decaying within”.

To most of us who have known Meher for decades, she does not come across as an activist participating in processions and agitations. Instead she takes the route of her work to comment on the grim conditions of her milieu. Her canvas with drawn bows and arrows, titled Main Hazara Hoon II, alludes to the sectarian killings of Shia community of Hazaras in the Islamic Republic. Another work Honour Killing, in the words of Perera “gives us a chilling reminder of the violence and brutality of the society in the name of family, religion and ethnicity”. In these and other works, she weaves words like rawadari, (tolerance), amn (peace) and amal (action) into visuals.

The language keeps coming to her like a natural calling, not only the written script, but the language of material, too, is at its best in the hands of Meher Afroz. She has turned her temperament for printmaking into a personal idiom, since the process itself is about a residue of the past. A print is the after-image of an initial plate, so looking at a work made in this method is a pact with the memory. Meher Afroz, in her work, not only imbibes formal exquisiteness, but also the pictorial tradition of this region, narrative culture, and the religious past that is still present – for most of us. In her recent pieces, she has been using paper, fabric and some other non-art materials to fabricate visuals that look minimal in appearance, but hold a complexity in their construction and connotation. Geometry is another such element regularly emerging in her pieces.

A popular tendency among art historians, critics and general public is to bracket a creative person in a set of motifs, ideas and imagery; and once that is established, sorting every work of the individual within that framework, not realising that artists are free souls so that with each new encounter with their creations we glimpse a new side or dimension to their artistic self. An interesting and useful feature of the monograph is that every contributor highlights a different aspect of the artist’s personality and art. Leafing through the book, with texts by such well known writers as Fahmida Riaz and Salima Hashmi, among others, a reader begins to formulate his/her own portrait of the painter. Probably a portrait made with the pigments of – what Orhan Pamuk calls huzun (grief), not private but of faith and politics, interwoven. The artist (as Amra Ali quotes in her essay A Sanctuary of Sacrifice) “recounts the [Urdu] verse by Mohsin Naqvi: ‘I was thinking what the treatment of sadness would be’”. In Meher Afroz’s case, A Beautiful Despair.