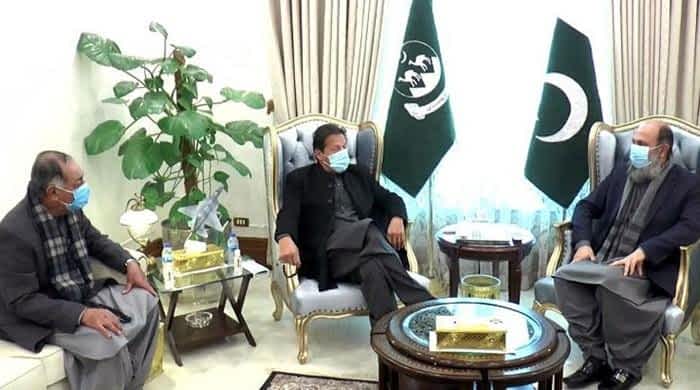 The prime minister came in the provincial capital on Saturday especially to meet the aggrieved families of the slain miners from the Hazara community. The premier, a day had vowed that he would visit Quetta once the deceased miners were buried.

Late Friday night, the Hazara community and the government reached a consensus after which the country-wide protests were called off and the roads were opened for traffic.

They had earlier conditioned calling off their protest and burial of the bodies with the prime minister’s visit and acceptance of their demands.

However, after multiple rounds of negotiations with the government team, the Shuhda Committee agreed to end the protest and bury the bodies.

Meanwhile, during the premier’s meeting with Balochistan’s top officials, the province’s security situation, as well as the circumstances that arose after the killing of miners in Machh, was discussed.

PM Imran Khan is accompanied by Interior Minister Shaikh Rasheed and other federal ministers. He will meet with the leaders and religious scholars of the Hazara community to share their grief and condole over the Machh tragedy.

The funeral prayers of the victims were offered in Hazara Town. SAPM Zulfi Bukhari and National Assembly Deputy Speaker Qasim Suri, and other provincial ministers were also present.

Earlier, Shuhda Action Committee announced to end protests across the country after the government accepted their demands.

Qasim Suri had said that “right after the burial”, PM Imran Khan will leave for Quetta and will be accompanied by Chief of Army Staff Gen Qamar Javed Bajwa.

Minister for Maritime Affairs Ali Haider Zaidi who had been spearheading talks in Quetta on behalf of the government had said such incidences of violence must now come to an end. “We are making amends for the last 70 years,” he noted.

Zaidi said that a written agreement had been reached with the Shuhda Action Committee. “No such written accord has ever been struck before with any other government,” he remarked.

“The demands put before us were difficult,” said Zaidi, adding that the “officers that must be removed have been decided”.

Maryam Nawaz to PM Imran Khan: ‘Nation curious about what’s stopping you from going to Quetta?’

The minister said that if governance in Pakistan “had not been so poor, poverty like this would not have existed”.

“People would not have been massacred like this,” he said, adding: “Foreign elements wish to create sectarian division in Pakistan.”

Zaidi also announced scholarships on behalf of his ministry for the children of all the victims.

With the agreement reached, the sit-in by the families of the victims of the massacre, which had been staged for the past six days in freezing cold temperatures, came to an end and the bodies were carried away to be buried.

Ten colliers were killed and four others were seriously injured on Sunday after armed men attacked them at a coal field in Balochistan’s Bolan district.

The coal miners, according to police, were taken to nearby mountains where they were shot.

According to AFP, the 10 miners were kidnapped before dawn on Sunday as they slept near the remote coal mine in the southwestern mountainous Machh area — 60 kilometres southeast of Quetta city, local government official Abid Saleem said.

Officials on Monday clarified ten people had died in the attack, revising a previous death toll of 11, AFP reported.

The militant group Daesh claimed the attack, according to SITE Intelligence, which monitors militant activities worldwide.