In three days, sugar prices in Karachi rise by Rs8 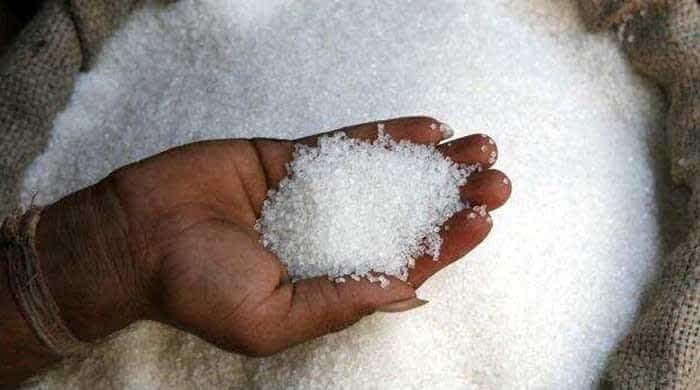 Sugar in a gunny bag scooped up by a seller for photographing up close. — AFP/File

The sugar prices in Karachi shot up by Rs8 in the last three days, Geo News reported citing market sources.

The sources said that the sweetener is being sold at Rs88 in the wholesale market. As a result, sugar is available at high rates in the retail market.

The commodity is being sold from Rs90-95 in the port city’s retail market, the sources said.

Meanwhile, citizens, lashing out at the government, termed the surge as its “failure”.

Hike by Rs5 two days ago

Two days ago, sugar prices rose by Rs5 per kilogramme.

The development came after Prime Minister Imran Khan praised his economic team for bringing down the price of sugar to Rs81 per kg a few days ago.

The price of sugar per kg went up in all major cities of the country, including Lahore, Karachi, Quetta, Multan, and Faisalabad.

A 100kg sugar sack was sold for Rs8,300 in Karachi’s wholesale market. Thus, it was available at Rs83 per kg. Moreover, in the retail market, sugar was sold for Rs90 per kg.

According to sources, sugar prices went up by Rs11 per kg within a month. In some areas of Karachi, the sweetener was being sold for Rs100 per kg.

In Multan and Faisalabad, sugar prices went up from Rs90 to Rs95 per kg.