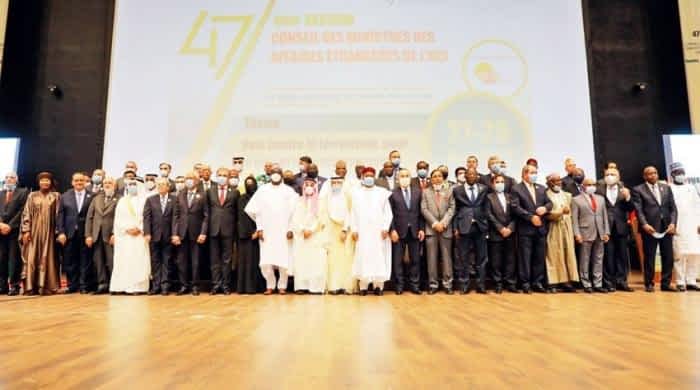 ISLAMABAD: The Foreign Office on Sunday stated that the inclusion of Jammu and Kashmir dispute in the Niamey Declaration of the 47th session of OIC Council of Foreign Ministers affirms  OIC’s strong support for the Kashmir cause.

The Declaration explicitly reiterated “the OIC’s principled position on the Jammu and Kashmir dispute for a peaceful settlement in accordance with the relevant UN Security Council resolutions”, according to a statement by the FO.

“The inclusion of Jammu and Kashmir dispute in the Niamey Declaration – being an important part of the CFM’s outcome documents – is yet another manifestation of the OIC’s consistent support to the Kashmir Cause,” the statement added.

On Saturday, the  OIC had reiterated its support for Pakistan regarding the Kashmir cause and called out India for its state-sponsored terrorism in the region.

According to a statement released by the FO on Sunday,  in a  comprehensive and strongly-worded Resolution, the OIC stated the following points, quoted verbatim below:

– Rejected the illegal and unilateral actions by India on August 5, 2019, to change the internationally recognized disputed status of the Indian Illegally Occupied Jammu and Kashmir (IIOJK), and demanded that India rescind its illegal steps;

– Demanded India to cancel the issuance of domicile certificates to non-Kashmiris and revoke all unilateral and illegal actions in IIOJK since 5 August 2019, while refraining from taking any step to alter the existing demographic structure of the disputed territory;

– Condemned in the strongest possible terms human rights violations perpetrated by Indian occupation forces in IIOJK and other such instances of Indian terrorism that have been the source of unspeakable suffering for the innocent Kashmiri people;

– Deplored the state-sponsored terrorism and crimes against humanity by Indian occupation forces against people of IIOJK;

– Condemned extra-judicial killings during fake ‘encounters’ and ‘search-and-cordon’ operations and demolition of homes and private properties as a form of collective punishment;

– Denounced the renewed use of pellet guns by Indian occupation forces against innocent civilians;

– Condemned the harassment of Kashmiri women by Indian occupation forces;

– Deplored that India has callously exploited the current COVID-19 crisis to intensify its military crackdown and further advance its unlawful occupation in IIOJK;

– Reaffirmed the sentiments expressed in the unanimously adopted Communiqués of the OIC Contact Group on Jammu &Kashmir in its Ministerial meetings held on 25 September 2019 and 22 June 2020;

– Urged India to adhere to its international human rights obligations and allow the OIC Special Representative on Jammu and Kashmir and the OIC Fact-finding Mission to visit IIOJK;

– Strongly urged India to implement recommendations of the two Reports of the UN High Commissioner for Human Rights on Jammu & Kashmir;

– Emphasized that the question of Kashmir is of utmost importance for the Muslim Ummah;

– Recognized that Jammu and Kashmir is the core dispute between Pakistan and India, and its resolution indispensable for realization of the dream of peace in South Asia;

– Acknowledged that the people of Jammu and Kashmir are the principal party to the dispute, and should be included in any peace process for resolution of the Jammu & Kashmir dispute;

– Affirmed that any political process/elections held under foreign occupation cannot be a substitute to the exercise of the right of self-determination;

– Underscored that Jammu & Kashmir is an unresolved question of granting the right to self-determination to the people of Jammu and Kashmir that has been on the agenda of the United Nations Security Council for over seven decades now;

– Reaffirmed that the fundamental right enshrined in the UNSC resolutions that the final disposition of the State of Jammu & Kashmir will be made in accordance with the will of the people, expressed through the democratic method of a free and impartial plebiscite, conducted under the auspices of the United Nations;

– Decided to further consider the Jammu and Kashmir dispute at the 48th Session of the CFM in Islamabad.