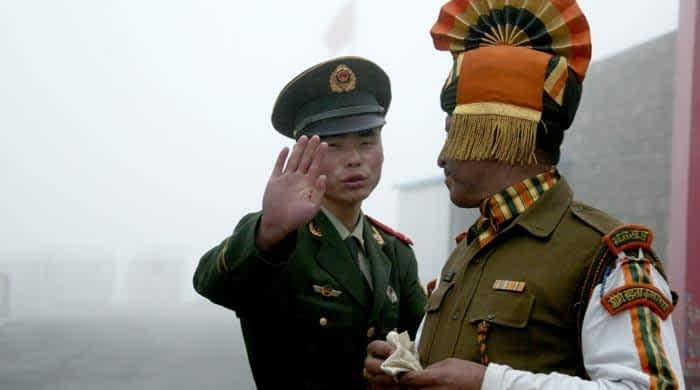 In this file photo taken on July 10, 2008 a Chinese soldier gestures as he stands near an Indian soldier on the Chinese side of the ancient Nathu La border crossing between India and China. — AFPIndian, Chinese soldiers indulged in physical brawl on January 20: reportSituation is under control, says Indian media, quoting sourcesChina has so far not reacted to the report

Tensions between India and China have yet again risen after troops of both sides indulged in yet again another physical confrontation, leading to injuries to soldiers of both countries.

China has so far not reacted to the report.

The Indian Army termed the incident a “minor stand-off”, saying that tensions were “resolved by local commanders as per established protocols”.

A source told Indian media that both sides had brought in reinforcements as the physical clash took place. The source added that the “situation is under control” at the border after the brawl.

The Naku La sector, located at an altitude of 5,270-meter, was also one of the original face-off sites when India had accused Chinese troops of intruding into its own territory in May-June last year.

Chinese and Indian troops have frequently clashed over the past one year at the disputed border in Laadakh and Sikkim.

The frequent confrontations have led to both countries trading serious accusations back and forth as well as amassing troops on the Line of Actual Control (LAC) from Ladakh to Arunchal Pradesh.

The ANI had said that both sides “have disengaged” after 17 Indian troops were injured in the brawl. The injured troops “exposed to sub-zero temperatures in the high altitude terrain have succumbed to their injuries”, the ANI had reported.

The soldiers were killed in a “physical fight” which involved the use of stones and batons, the NDTV had reported.