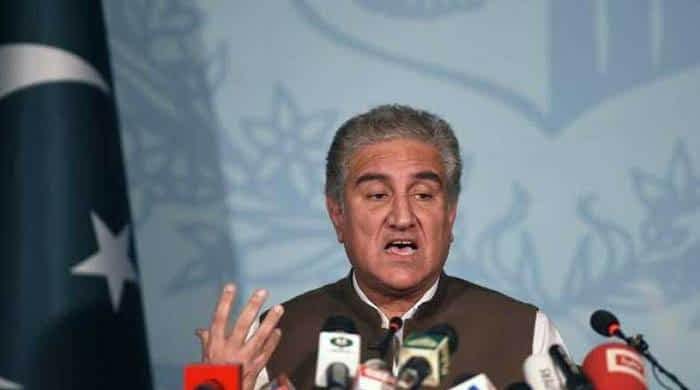 “The evidence shows how India is backing terrorists and how India seeks to target CPEC projects,” he said.

Qureshi said Pakistan’s future as well as that of the region is linked to CPEC. “We are committed to ensuring all possible security [for the project],” he said.

“China also understands the importance of CPEC, so it has sent a clear message on security,” said the foreign minister.

He said Pakistan will work with China to protect CPEC and complete its associated projects.

Qureshi said that all the concerns expressed in the dossier will be raised at the United Nations and all major international forums.

“Pakistan is working for stability in the region, including peace in Afghanistan,” he said.

Pakistan will not remain silent on Indian tactics, he vowed, adding that India’s attitude is irresponsible and it will fail on every front.

Commending Pakistan’s contribution to the international counter-terrorism cause, Beijing on Friday backed Islamabad’s efforts to combat terrorist forces and safeguard national and regional peace and security.

He called on the international community, especially regional countries, to carry out counter-terrorism cooperation and safeguard collective security.

Later, in a tweet, Zhao said China appreciated the “positive contribution by Pakistan to the international counter-terrorism cause” and “firmly supports Pakistan in cracking down terrorist forces”.

On China-Pakistan Economic Corridor (CPEC), he asserted that any attempt to sabotage the project is doomed to fail.

“CPEC is a major pioneering project of the Belt and Road Initiative,” he said during the daily press briefing. “It is of great significance to not only the common development of China and Pakistan but also regional connectivity and common prosperity.”

Zhao said Beijing was “confident that with the support from the international community, China and Pakistan will ensure the smooth and successful building and running of CPEC”.

“Meanwhile, we believe that any attempt to disrupt the building of CPEC would be foiled eventually,” he added.

Last Saturday, Pakistan presented a detailed dossier containing evidence of India’s involvement in terrorism being carried out in Pakistan.

“Today, we have irrefutable facts that we will present before the nation and the international community through this dossier,” Foreign Minister Shah Mahmood Qureshi said as he addressed a press briefing at the Foreign Office alongside Director-General of Inter-Services Public Relations (ISPR), Maj Gen Babar Iftikhar.

During the detailed briefing, Qureshi and Maj Gen Iftikhar highlighted how India is promoting terrorism with not only the use of its own soil but also neighbouring countries and has developed a plan to destabilise Pakistan.

Maj Gen Iftikhar said that India is uniting terror outfits and encouraging them to act against Pakistan. He said that these organisations are aimed to be united under Baloch Raaji Aajoie Sangar (BRAS), which was constituted in 2018.

He added that Indian embassies and consulates operating along Pakistan’s borders are becoming a hub of terror sponsorship against Pakistan.

The DG ISPR said that India had raised a militia of 700 people to undertake terrorism in Balochistan, especially with a view to sabotage the China-Pakistan Economic Corridor (CPEC).

The army spokesperson said Indian intelligence agencies are managing 87 terrorist camps — 66 out of which are located in Afghanistan and 21 in India. He said India has also been rendering support to various entities through the provision of weapons, ammunition and IEDs.

The army spokesperson highlighted major attacks that were traced back to RAW.

Furthermore, he said that India will mobilise “hostile elements” to undertake various subversive operations in Kashmir and GB after November 20.

He said RAW also aims to target public gatherings and assassinate a mainstream and sub-national leader in GB or AJK.