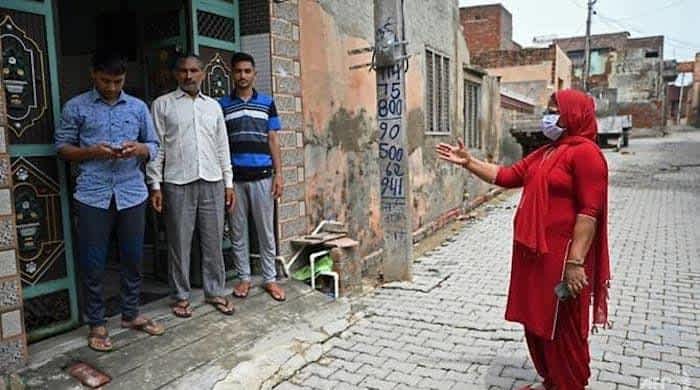 When health worker Neelam Kumari knocks on doors in Indian villages the occupants sometimes run out the back, terrified that she wants to vaccinate them against Covid-19.

“A lot of people in my village don’t want to take the vaccine. They fear that they will die if they take it,” Kumari told AFP in Dhatrath, a collection of two-storey buildings in Haryana state with buffaloes wandering the streets.

“One of the villagers was so angry that he beat up a (health) worker who was trying to convince him to take the vaccine.”

Just 15 percent of people in rural areas, compared with 30 percent in towns and cities, have received at least one vaccine dose so far — even though two-thirds of cases are being reported in the countryside, according to an analysis by The Hindu daily.

Rumours are shared online or spread through messaging apps like WhatsApp. Fears that 5G causes Covid-19 led to mobile towers being attacked in Haryana.

“People do not even step forward for testing as they think the government will declare them Covid-positive even if they are not,” Shoeb Ali, a doctor in Miyaganj village in the northern state of Uttar Pradesh, told AFP.

This fear pervades despite the sight of bodies dumped in rivers and hundreds of shallow graves suggesting that Covid-19 is raging in India’s hinterland where 70 percent of the 1.3-billion population lives.

In Nuran Khera village in Haryana, residents are reluctant to get inoculated even though they said many households reported having fever — and dozens of people dying.

“Even after opening up a vaccine centre here, nobody is ready to take it,” villager Rajesh Kumar, 45, told AFP.

“I won’t take the vaccine because it has many side effects. People get sick after getting vaccines.”

In other states, reports have emerged of people jumping into rivers or fleeing into forests just to escape mobile health teams.

“What do we tell someone who says, ‘If I’m destined to live, I will, even without the vaccine’?,” she asked.

Health facilities are also few and far between and some people believe that going to a public hospital is more dangerous than staying away.

“People who went to hospital never came back,” another villager in Nuran Khera, who gave his first name as Kuldip, told AFP.

Kumar said that when his wife fell sick, a private clinic wanted 50,000 rupees ($700) in advance to treat her. A doctor at a public hospital said to take her home.

“My neighbours started saying she has corona. They were frightened,” he added. “I took care of her and on the third day she was back on her feet.”

“It’s extremely difficult to communicate why vaccination is important until some of those distressed conditions are alleviated,” Dasgupta told AFP.

Experts say that India needs to apply the lessons learnt in its polio vaccination campaign in the 2000s of children under five.

The programme succeeded after trusted community leaders were involved to spread the message to parents that inoculation was safe.

Using a similar approach, religious leaders in Uttar Pradesh were recently called in to encourage their followers to get vaccinated for coronavirus.

Navneet Singh, who oversees immunisation efforts in Haryana’s Jind district, says that face-to-face communication had helped ensure that nearly 70 percent of over-45s in Kalwa and neighbouring villages have received at least one shot.

Kalwa health worker Sheela Devi said her “heart was pounding” when her name was included in the vaccination list, but she was reassured when she saw the local doctor getting the shot.

Now she works every day in the village, going door-to-door trying to talk people round, with some success.

“Gradually they were convinced that even if they get corona after getting vaccinated, they won’t need hospitalisation. They can take medicines and recover at home,” the 45-year-old told AFP.