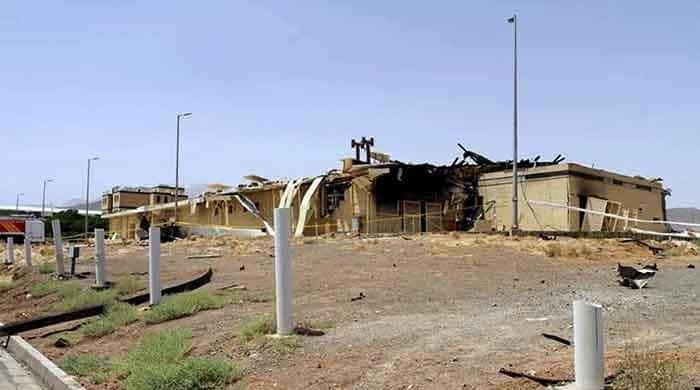 A handout picture provided by Iran’s Atomic Energy Organisation (aeoinews) shows a warehouse after it was damaged at the Natanz facility, one of Iran’s main uranium enrichment plants, south of the capital Tehran. Photo: AFP/Handout

TEHRAN: Iran vowed on Monday to take vengeance from Israel after it claimed that Tel Aviv was behind an attack on the Natanz uranium enrichment plant carried out a day earlier.

“Of course the Zionist regime, with this action, tried to take revenge on the people of Iran for their patience and wise attitude regarding the lifting of (US) sanctions,” spokesman Saeed Khatibzadeh said at a press conference.

The Sunday incident, which Iran called an act of “anti-nuclear terrorism,” came a day after Tehran said it had started up advanced uranium centrifuges at Natanz, a breach of its commitments under the troubled 2015 deal with world powers.

The US withdrew from the accord in 2018 and re-imposed sanctions, prompting Iran to retaliate by progressively rolling back its own commitments.

Iran´s atomic energy organisation spokesman had earlier reported an accident at Natanz caused by a “power failure”, with no injuries or pollution.

According to Khatibzadeh, the attack affected a number of first-generation IR-1 centrifuges “which will all be replaced with advanced” ones.

He vowed that Iran´s response to the attack would be “revenge on the Zionist regime” when and where Tehran chooses.

“If the purpose was to interrupt the path of lifting the oppressive sanctions against Iran, they will certainly not reach their goal”.

The Natanz incident followed an opening round of talks in Vienna Tuesday with representatives of the remaining parties to the nuclear deal.

The talks are focused on lifting US sanctions reimposed on Iran by former president Donald Trump and on bringing Tehran back into compliance with the accord.

He stressed the need to avoid “falling in the trap” set by Israel, it said.

“We will not allow (Israel to derail the talks) and we will take revenge for these actions on the Zionists,” Zarif was quoted by MPs as saying during a parliamentary session, IRNA reported.

Heinrich Klaasen to lead South Africa against Pakistan in T20Is