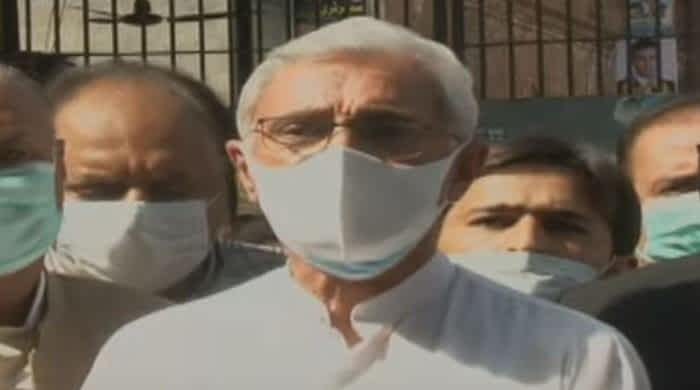 PTI leader Jahangir Tareen on Wednesday broke silence over reports that he is meeting former president Asif Ali Zardari and may join the PPP.

The PTI leader rejected the reports, saying he was not parting ways with the party.

Tareen was speaking to the media after he arrived at the banking court to attend his bail hearing. “Not one, not two but three FIRs have been registered against me,” he said.

“Out of the 80 sugar mill owners, all they could see was Jahangir Tareen,” he said, questioning why he was being subjected to “revenge”.

The PTI leader said his “loyalty is being tested”. He added that an inquiry against him, relating to the sugar crisis, has been going on for the last year.

He lamented that his accounts as well as those belonging to his son, Ali Tareen, had been frozen. “Why have my accounts been frozen? Who is doing this? Who benefits from this?” he asked.

Tareen said he was “asking for justice from Pakistan Tehreek-e-Insaf”, adding that he was a friend, but is being “pushed towards enmity”.

In response to a question, Tareen said it was time to expose those involved in a conspiracy against him. He said PM Khan can expose the person who was hell-bent on exacting revenge against him.

Despite his grievances against the ruling party, Tareen said he was not parting ways with the PTI. “I am a member of the PTI and will remain so,” he said.

When a reporter asked Tareen whether he was about to meet former president and PPP leader Asif Ali Zardari, he said the reports were not true.

Sindh Minister for Women Development Shahla Raza, who belongs to the PPP, on Tuesday deleted a tweet in which she speculated on the possibility of Tareen joining PPP during a meeting “next week” with Zardari in Karachi.

Raza had claimed Tareen had already met PPP’s Makhdoom Ahmed Mahmood, and “it is believed he will meet Zardari” in Karachi.

“It is believed he will leave PTI and join PPP along with his aides during the meeting,” she had tweeted.

“If such a thing happens, neither will Buzdar [remain in the government], nor will Niazi,” the PPP leader had written.

Responding to Raza’s statement, Tareen had said a “consistent propaganda” campaign is in place against him. “The reports of my meeting with PPP leaders are baseless.”

“People spreading rumours against me will be disappointed,” he added.

The development comes after the Federal Investigation Agency [FIA] sent notices to Tareen and his son, Ali Tareen, summoning them in multiple inquiries, on April 9.

Earlier this week, it was reported that FIA Lahore had registered a case of alleged fraud of Rs3.14 billion on March 22 against father-son duo.

The FIR states that Jahangir allegedly transferred illegal shares worth billions of rupees to Farooqi Pulp Mills Limited (FPML), which is owned by his son and close relatives.

It says the transfers, especially after 2011-12, were “patently fraudulent investments which ultimately translated into personal gains” for Jahangir’s family. Some Rs3 billion were invested and laundered through the same factory.

Jahangir Tareen not as close to PTI now: Sheikh Rasheed

The interior minister was talking about the PTI leader on Geo News programme Aapas ki Baat. He had said there is a major distance now between PTI, the government and Jahangir.

Asked about the inclusion of the names of Jahangir and his son Ali Tareen on the Exit Control List, Rasheed had said that he had not yet received any information on the matter.

Afghanistan’s road to peace paved with remnants of war