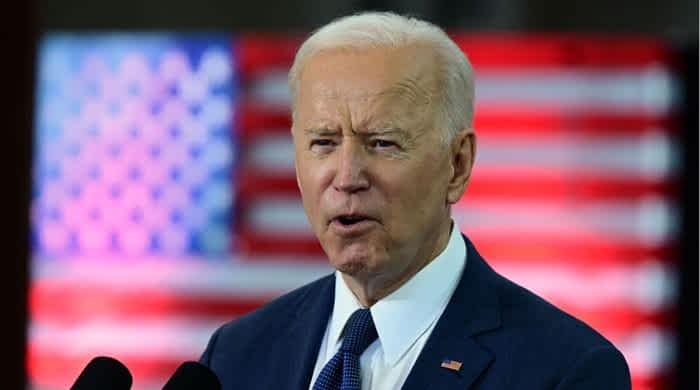 US President Joe Biden speaks in Pittsburgh, Pennsylvania, on March 31, 2021. Photo: AFP First phase of Joe Biden’s “Build Back Better” programme details massive investment spread over eight years.Cost would be partly covered by raising corporate tax from 21% to 28%.Joe Biden’s speech fires starting gun on what is expected to be a bitter battle in Congress.

WASHINGTON:  President Joe Biden on Wednesday unveiled an ambitious  $2 trillion infrastructure plan to modernise America’s crumbling transport network, create millions of jobs and enable the US to take on China on the global economic stage.

The first phase of Biden’s “Build Back Better” program, which he set out in a speech in Pittsburgh, details massive investment spread over eight years.

Putting infrastructure at the centerpiece of the president’s economic agenda, it calls for the injection of $620 billion into transport, including upgrading 20,000 miles of roads, repairing thousands of bridges and doubling funding for public transport.

“Today I’m proposing a plan for the nation that rewards work, not just rewards wealth. It builds a fair economy that gives everybody a chance to succeed. It’s going to create the strongest, most resilient, innovative economy in the world,” Biden said.

“It’s a once-in-a-generation investment in America, unlike anything we’ve seen or done since we built the interstate highway system and the space race decades ago.”

The cost would be partly covered by raising corporate tax from 21% to 28%.

And Biden’s speech fired the starting gun on what is expected to be a bitter battle in Congress, where the Democrats hold only a narrow majority and will face strong opposition from Republicans.

The president described the blueprint as the “largest American jobs investment since World War II,” which would cement the country’s position at the top of the global economy.

“It will create millions of jobs, good-paying jobs. It will grow the economy, make us more competitive around the world, promote our national security interests and put us in a position to win the global competition with China in the upcoming years,” he said.

The first criticisms came before Biden even gave his speech, some of it from the progressive wing of his own party.

From the opposite corner, Biden’s Republican predecessor Donald Trump said the tax hike would “decimate US manufacturing” and described the proposed legislation as “among the largest self-inflicted economic wounds in history.”

The coming months will test the negotiating skills of Biden, a veteran Washington dealmaker, to the limit, and the chances of his infrastructure plan becoming law remain uncertain.

The plan also vows to “spark the electric vehicle revolution” by building a network of 500,000 EV chargers, replacing 50,000 diesel transit vehicles and accelerating the transition to a greener economy that makes infrastructure more resilient to climate change.

“The American Jobs Plan will lead to transformational progress in order to tackle climate change… by making our infrastructure more secure and resilient and seizing incredible opportunities for American workers and American farmers in a clean energy future,” Biden said.

With much of the country’s creaking infrastructure dating back to the 1950s, the dream of new roads, bridges, railways and airports is shared by many Americans.

But building a political consensus to transform Biden’s plan into reality is no easy task. Both his predecessors Barack Obama and Trump made heady promises over infrastructure investment, but struggled to make any progress.

Biden’s new transportation secretary Pete Buttigieg, who ran against Biden in the Democratic presidential primary, will be on the front lines of the battle, trying to ensure that this time, the stars are aligned.

“I think that there’s a tremendous opportunity now to have bipartisan support for a big, bold vision on infrastructure,” Buttigieg said.

“Americans don’t need a lot of selling to know that we’ve got to do big things when it comes to our infrastructure.”

The US Chamber of Commerce backed the infrastructure push, but said Biden’s proposal was “dangerously misguided” over how to fund it.

Biden said an increase to 28% in corporation tax would still leave the rate lower than it was for almost 70 years between World War II and 2017.

“This is not about penalising anyone. I have nothing against millionaires and billionaires.”

Another deadly day as coronavirus claims 118 more lives in Pakistan