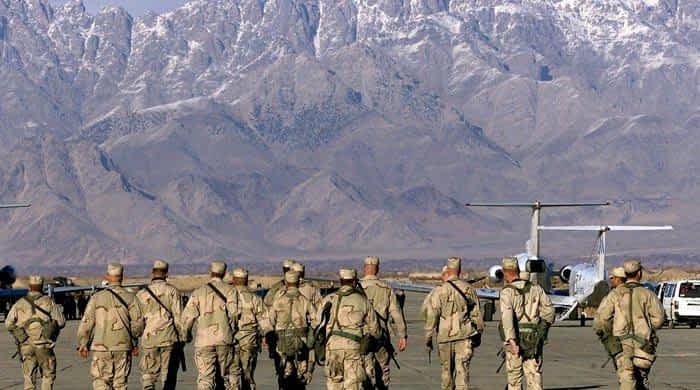 In this file photo taken on January 15, 2002, American soldiers approach the United Nations planes on the tarmac of the Bargam airbase in Bagram. All US and NATO troops have left Bagram Air Base, a US defence official told AFP Friday, signalling the complete withdrawal of foreign forces from Afghanistan was imminent. — AFP/File

WASHINGTON: US President Joe Biden announced Thursday that the US military mission in Afghanistan will end on August 31, nearly 20 years after it began.

The US military has “achieved” its goals in the country to degrade Al-Qaeda and prevent more attacks on the United States, Biden said in a speech.

“We are ending America’s longest war,” he added.

“The status quo is not an option,” he said of staying in the country.

“I will not send another generation of Americans to war in Afghanistan.”

He said the United States “did not go to Afghanistan to nation-build.”

“It is the right and the responsibility of the Afghan people alone to decide their future.”

Biden pledged to continue supporting the Afghan government and security forces and that thousands of Afghan translators who worked for US forces and face threats from the Taliban insurgents would be able to find refuge in the United States.

“There is a home for you in the United States if you choose,” he said. “We will stand with you, just as you stood with us.”

Biden said he was confident the Afghan armed forces could stand up to the Taliban, who have made strong advances across the country since the beginning of the year.

He also said a takeover of the government by the Taliban is not inevitable.

“I trust the capacity of the Afghan military,” Biden said.