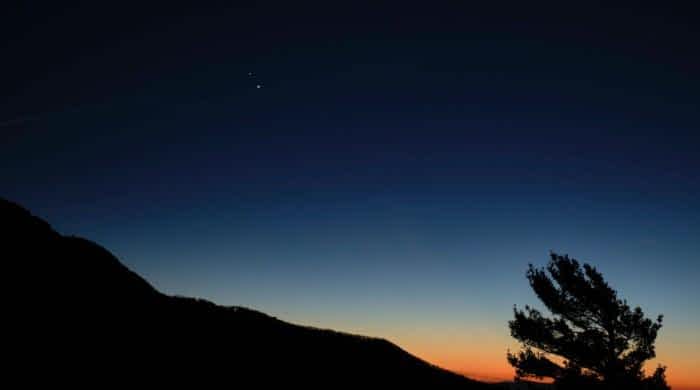 The much-anticipated celestial event will occur on Monday. The great conjunction will be visible around the world, including Pakistan. This is the first time the planets will come so close to each other since 1623.

To a magnificent spectacle, the world’s largest two planets, Jupiter and Saturn, will come closer together on Monday evening after centuries.

This is the first time the planets will come so close to each other since 1623. NASA, in its statement, said that celestial occurrence, known as the ‘Christmas Star’, is an especially vibrant planetary conjunction easily visible in the evening sky over the next two weeks as the bright planets Jupiter and Saturn come together, culminating on the night of December 21.

It said that the much-anticipated celestial event will occur on Monday evening and will be visible around the world, including Pakistan.

The fact that makes it the rarest spectacle in years is that it is nearly 400 years since the planets passed this close to each other in the sky, and nearly 800 years since the alignment of Saturn and Jupiter occurred at night.

“On the 21st, they will appear so close that a pinkie finger at arm’s length will easily cover both planets in the sky,” NASA explained, adding that the planets will be easy to see with the unaided eye by looking toward the southwest just after sunset.

Although it will remain hundreds of millions of miles apart in space, from our point of view from Earth, the huge gas giants will appear very close together.

Do you want to see the “great conjunction” of  universe?

If yes, here’s how you can see the magnificent spectacle with few simple steps:

Find a spot with an unobstructed view of the sky, such as a field or park. Jupiter and Saturn are bright, so they can be seen even from most cities.Saturn will be slightly fainter and will appear slightly above and to the left of Jupiter until December 21, when Jupiter will overtake it and they will reverse positions in the sky.The planets can be seen with the unaided eye, but if you have binoculars or a small telescope, you may be able to see Jupiter’s four large moons orbiting the giant planet.An hour after sunset, look to the southwestern sky. Jupiter will look like a bright star and be easily visible.