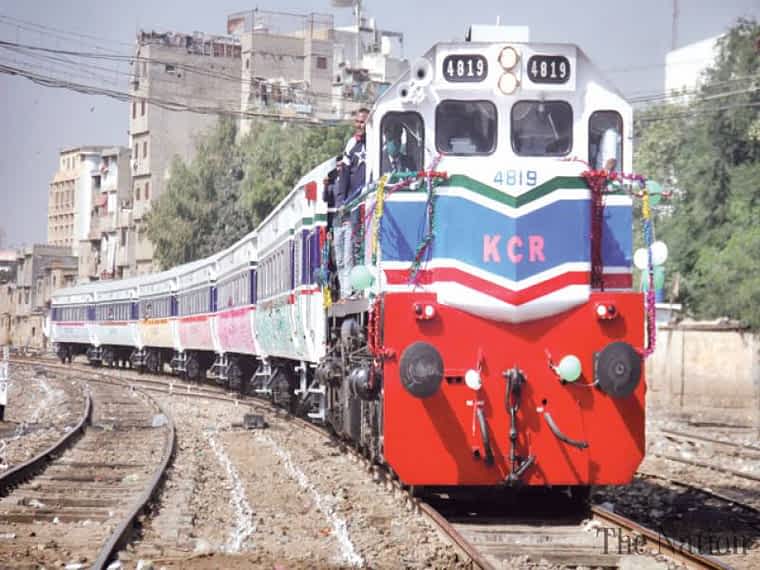 Addressing the media on the occasion, he announced reduction in the fares of the train from earlier announced Rs. 50 to Rs. 30. The Karachi Circular Railway (KCR) started partial operations on a 14km cleared stretch of the around 55km route of the old KCR.

Speaking at the inauguration ceremony, Minister for Railways Sheikh Rashid revealed that the KCR fare would be Rs30 per route and in the first phase four trains would be run daily from Pipri to City Station. He added that a travelling pass for the KCR would be available for Rs750. Rashid said there was a huge land mafia on the KCR tracks and the Sindh government would try to clear it.

“In 25 years, the land mafia has taken over the KCR tracks. We are making efforts […] We are fully cooperating with the Sindh government. They have started work on sewerage lines, they have [issued tenders] for over-bridges. As more bridges keep coming, we will increase the KCR [tracks] and the credit goes to the Imran Khan government.

“We are going to do lots of work in railways and God willing we will try to reduce the problems of Karachi. We will completely modernise [the KCR] within a year.” Talking about the cost of the project, he said: “One coach cost Rs9 million and 40 coaches have been refurbished. Around Rs1.8 billion has been allocated of which Rs17m has been spent so far.”

Responding to a question about when the complete track would be recovered from the land mafia, the minister said the Supreme Court’s orders were for the Sindh government. “I don’t want to hide anything from you. We are not getting political support from any party in Karachi. It is the Sindh government’s job to get stations emptied from the land mafia. “You can see we are even going towards Tajori Heights because this is all railway land which people have occupied.” Rashid said Pakistan Railways would work quickly to complete all KCR tracks. “Sindh government has given the tender for over-bridges to FWO (Frontier Works Organisation). We will be there already before the over-bridge is built. In the next stage, [we will also start operations] to Landhi and Korangi.”

He said PR had tried to implement the top court’s decision “as best as it could”, adding that the entire map of an area can change in 25 years. “The [people living on the land] are not willing to accept. They say it was my grandfather’s etc.”

He gave the “entire credit” for the launch of KCR operations to the Chief Justice of Pakistan, saying he was the one who gave the “key” to all stakeholders. Rashid said he needed “only 15 days” to improve the conditions of the stations.

“I wanted to change all the coaches. I issued tenders thrice but only one party applied all three times. This is why Pakistan Railways did not spend even a rupee in the last two years.” He said PR was ready to hand over the KCR to a private company after it was completed.

According to a spokesperson for the PR, the first KCR train (1-Up) would depart at 6.30am from Orangi station and reach the destination at 9.15am via Manghopir, SITE, Shah Abdul Latif, Baldia, Lyari, Wazir Mansion, Karachi City, Cantt, Departure Yard, Drigh Road, Drigh Colony, Airport, Malir Colony, Malir, Landhi, Juma Goth, Bin Qasim and Baldia Nullah. The second train would depart at 10am followed by a third at 1pm, and the last one at 4pm. Similarly, the departure time of the train from Marshalling Yard to Orangi is at 7am, followed by a second train at 9.30am, third at 1pm and finally at 4.30pm.

KCR started in 1964 and continued to rise in popularity, carrying as many as six million passengers a year in its heyday. Indeed, for over 25 years, the circular railway — which connected all major industrial, commercial, educational and residential areas of the city at that time — remained the Karachiite’s public transport of choice.

However, unable to withstand the pressures of a growing transport mafia, a deteriorating commuter service and an increasing culture of fare dodging, the railways’ incompetent bosses abandoned Karachi’s rudimentary mass transit system. After another decade of wobbly and sporadic service, KCR finally shut down for good in 1999.