Karachi continues to be plagued by scourge of rampant vehicle thefts 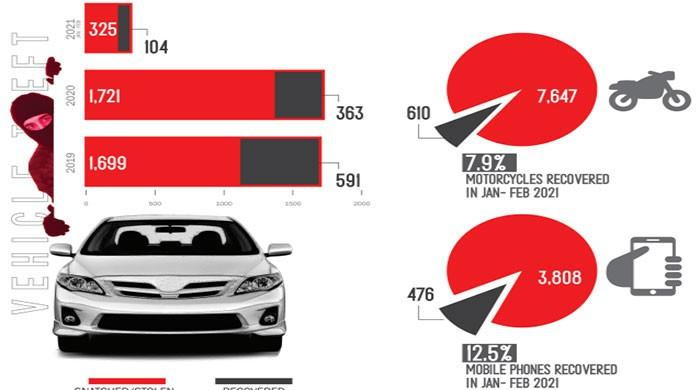 The data compiled by the Citizens-Police Liaison Committee (CPLC) shows that the scourge of rampant thefts of mobile phones, motorbikes and cars continues to plague Karachi even in the new year, whose first quarter is yet to complete.

As for mobile phones, the CPLC data shows 3,808 of the devices were snatched in January and February, but the police were able to recover only 476 of them. The data also shows two cases of kidnapping for ransom, three of extortion and 62 of homicide were registered in the first two months, but there had been no bank robbery in January or February.

The overall situation of the past couple of years seems slightly better in comparison, at least in the case of incidents of snatching and stealing cars. Last year 194 four-wheelers were snatched and 1,527 others stolen, while the year before that 247 were snatched and 1,452 others stolen. The police were able to recover only 363 of them in 2020 and 591 in 2019.

Some parts of Karachi, especially the Bhittaiabad, Korangi, Zaman Town, Shah Latif and Ibrahim Hyderi areas, have emerged as hot spots for vehicle thefts. Several cars have been stolen from these localities in recent days.

Besides incidents of stealing cars, snatching of four-wheelers, including delivery vehicles of multinational companies, are also on the rise. The residents of the hot spot areas have voiced their disappointment in the performance of their respective local police officials.

“I lost my white Toyota Corolla parked outside my house,” said a Bhittaiabad resident who was deprived of his car a couple of weeks ago. A case was registered at the Zaman Town police station.

The investigation of the case was transferred to the ACLC, but they have failed to trace the four-wheeler or catch any of the suspects despite being provided with CCTV camera footage and other evidences.

ACLC Korangi in-charge Najafat Hussain admitted that vehicle thefts have been increasing in the hot spot areas, saying that a new group of boys or young men has apparently been operating in the city.

“The group is lifting Corollas and smuggling them to other parts of the country, including Balochistan. Three incidents of car lifting have been reported in the recent days, but the number of unreported incidents can be higher.”

Citizens of Karachi have lamented that even though a special cell, namely the ACLC, has already been operating in the city to counter vehicle thefts, people continue to be deprived of their vehicles and suffer heavy losses because of it.

Citizens have also complained that there is no mechanism in place for the ACLC to take timely action, as the cell starts its investigation only after a case is registered. “Police usually register a case 24 hours after the vehicle has been lost,” explained a citizen who had also lost his, “and then the FIR of the case is transferred to the ACLC, which then starts making efforts for the vehicle’s recovery.”

He said the performance of the ACLC and the percentage of the stolen vehicles recovered show that “it would be better to abolish this cell because extra budget is already being provided to them by the police department, but their performance is very slow”.

Another citizen complained that while his motorbike that had been lost last year was recovered within a few days, the police did not seem to be in a hurry to return it.

“When I received news that my motorcycle had been recovered, I went to the police station, but they told me that my two-wheeler would be handed over to me in their annual or bi-annual ceremony that they organise to take credit for the vehicles recovered.” He lamented that even though his motorbike had been recovered, he was made to wait for a couple of months before his two-wheeler was handed back to him.

30m families in Punjab to get health cards by year end