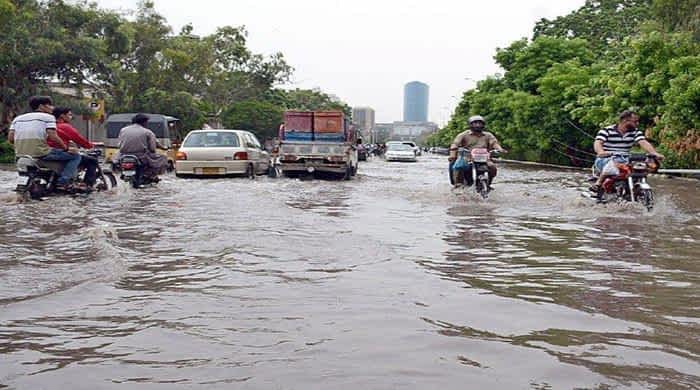 Rain lashed different parts of Karachi for the second consecutive day on Saturday, inundating the low-lying areas as well as a few arteries of the city.

A resident of District Korangi’s Shaan Chowrangi, Qurban Sagar, complained how they did not have power since Friday’s downpour. A vast area of North Karachi remained in darkness in the early hours of Saturday. A resident, Syed Hassan, shared how the power was not resumed until Saturday morning.

Karachi’s sole power provider, K-Electric, said in its tweet at 5:18pm that moderate to heavy rain had been reported across the city, interrupting power supply of approximately 190 feeders. “We are monitoring the situation and will keep updating this space. Citizens are requested to stay indoors and away from all electric infrastructure.” The situation in District Central after Saturday’s rain was comparatively better than Friday’s. However, several areas, including Nagan Chowrangi, KDA Chowrangi, Ayesha Manzil and Shafiq Morr, were inundated with rainwater.

Zaidi monitored the water drainage work in Liaquatabad, Nazimabad, North Nazimabad, Gulberg and New Karachi. He said that heavy and light machines were being used by the district administration for the drainage of water.

The Federal B Area’s Rafah-e-Aam Hospital area, Nagan Chowrangi, Hyderi Market and KDA Chowrangi remained flooded until the early hours of Saturday. However, the situation was brought under control when Karachi Administrator Murtaza Wahab and the Central deputy commissioner took action. Saleem said Liaquatabad Daak Khana and parts of Nazimabad were completely cleared by Saturday morning.

Installation of the pilot street light project in District Central’s Nazimabad area turned out to be a blessing in rain, especially during the drainage work, according to Saleem.

Last month KE installed the lights that are automated and “remove human elements to turn them on and off. It saves power and is also safer during rains.”

Meanwhile, the situation in District East was also brought under control after Saturday’s rain, probably because it did not rain much in the area. However, in the early hours of Saturday, University Road, especially at Samama and Safari Park, Nipa and parts of Rashid Minhas Road, and the roads leading to the airport remained flooded.

East DMC Administrator Shoaib Malik and Municipal Commissioner Ghulam Sarwar visited different areas of the district and monitored the drainage work. According to a press statement issued by the East DMC, additional dewatering pumps were installed at various choking points when it rained on Saturday.

Karachi Administrator Wahab also visited different areas of the city on Saturday and monitored the drainage work. He visited Sharea Faisal, Gulshan-e-Iqbal, Purani Sabzi Mandi, Stadium Road and Hassan Square. He said that despite record rain over two days in the city, the situation was pretty much under control.

Power supply to some parts of the city was affected as sporadic bursts of heavy rain hit the city on Saturday, with approximately 190 feeders out of the KE’s network of 1,900 affected during the spell of rain.

Restoration efforts began as soon as the rain subsided, and currently over 1,710 feeders continue to supply power across the city. KE’s field teams remain present and active in rectifying localised faults.

However, accumulated water impacted the restoration times. KE is available 24/7 for any queries or complaints via its call centre 118, SMS service 8119, KE Live App and its official social media channels.

With the forecast of more rain, consumers are advised to continue taking safety measures and maintain a safe distance from electricity infrastructure in case of downpour. They are also urged not to use electronic appliances barefoot or with wet hands.