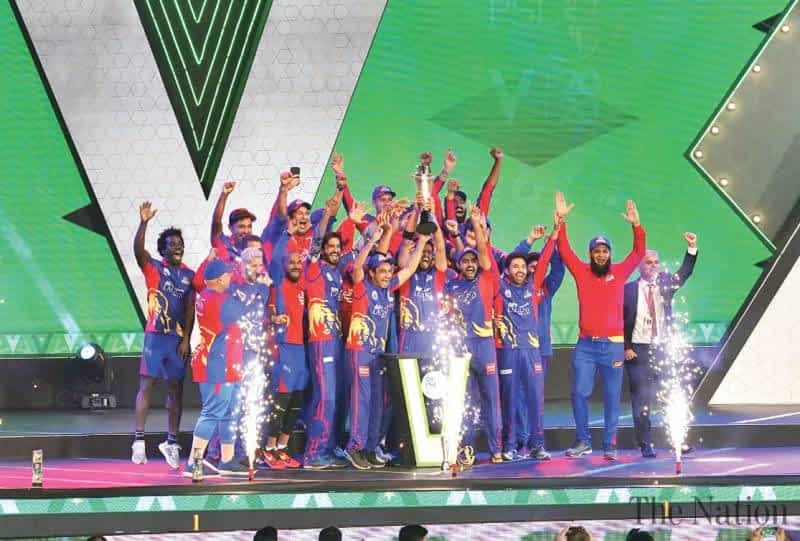 In the final played at National Stadium Karachi on Tuesday night, Karachi Kings started their run chase well as both the openers added 23 runs for the first wicket stand. Samit Patel took the first Karachi wicket in 3.1 overs, when he sent Sharjeel packing at his individual score of 13. Soon Alex Hales followed him and left the crease scoring 11 runs. For the third-wicket stand, reliable batsman Babar Azam and Chadwick Walton added significant 61 runs.

After the departure of Walton (22), Babar made one end intact and kept on scoring valuable runs while on the other end, Karachi players kept on losing their wickets cheaply, as first Iftikhar Ahmed left the crease scoring just 4 runs, and then Sherfane Rutherford followed him after contributing nothing. Captain Imad then joined Babar and both landed their side home safely, chasing the required target in 18.4 overs losing five wickets.

For Lahore Qalandars, Dilbar Hussain (2-28) and Haris Rauf (2-30) bowled well but their efforts couldn’t bear fruit for their side, which struggled hard to reach the final for the first time in the PSL history. With this victory, Karachi Kings succeeded in lifting their maiden PSL trophy. Their coach Wasim Akram dedicated the title win to late Dean Jones saying, “It’s the late Jones’ hard work that’s brought this about.”

Earlier Lahore Qalandars won the toss and decided to bat first. Their decision could pay dividend as they could score 134-7 in 20 overs. They started well by scoring 68 runs for no loss in 10 overs but after that, they kept on losing wickets on regular interval and failed to pile up a big total.

Tamim Iqbal (35) was the first Qalandars’ players, who lost his wicket at the total of 68 in 10.1 overs. In the same over, Fakhar Zaman (27) was also sent packing by Umaid Asif. After the departure of both the openers, no big contribution came from any Qalandars batsman. Only Captain Sohail Akhtar (14), last-match hero David Wiese (14 not out), Shaheen Shah Afridi (12 not out) and Ben Dunk could cross the double figures. Umair Asif (2-18), Waqas Maqsood (2-18) and Arshad Iqbal (2-26) bowled brilliantly for Karachi Kings.

Meanwhile, Babar Azam was named player of the PSL 2020 as he finished the tournament with 473 runs, including three player of the match awards, that also helped him win the award for best batsman of PSL 2020. Babar is the second Karachi Kings’ player to win the prestigious award after Ravi Bopara was declared player of the PSL 2016 after aggregating 329 runs and taking 11 wickets.

Shaheen Shah Afridi won the best bowler of the PSL 2020 with 17 wickets, at a strike-rate of 16.4 and economy-rate of 7.11. Shaheen’s Lahore Qalandars’ teammate Ben Dunk lifted the award for best wicketkeeper of PSL 2020 after accounting for nine batsmen behind the wickets.

Haider Ali was declared the emerging player as he justified his category by first making an impression in the first half of the tournament that earned him a Pakistan call-up before finishing the competition with 239 runs at a strike-rate of 157.23. Fakhar Zaman was named as the best fielder when his fitness and agility not only helped him save critical runs and create run-out opportunities, but also finished with 10 catches.

Shaheen Afridi not out 12

Babar Azam not out 63

A Hales b Dilbar Hussain 11

Imad Wasim not out 10