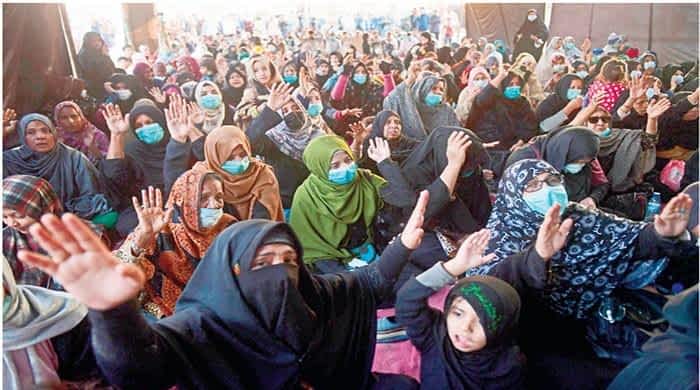 Massive traffic jams were again observed in various parts of Karachi on Thursday as the Hazara community and Shia groups continued with their protest sit-ins and demonstrations at over 20 spots in the city to show solidarity with the Hazara families protesting the Machh tragedy in Quetta.

As the bereaved families in Balochistan have not buried the bodies in protest and are demanding that the prime minister should pay a visit to them, Shia groups, including the Majlis Wahdat-e-Muslimeen (MWM), the Shia Ulema Council, the Jafria Alliance, the Imamia Students Organisation and the Jaffaria Students Organisation, along with the Hazara community have been holding sit-ins on various roads of Karachi to express solidarity with the families.

According to a traffic official, Rangers and police have also been deployed to assist the traffic police and ensure the law and order in these areas. However, traffic has been severely affected due to the protests and the commuters are being directed to take alternative routes.

The Joint Action Committee (JAC), a joint platform of the civil society organisations, on Thursday staged a protest demonstration outside the Karachi Press Club against the killing of 11 Hazara mine workers in Machh.

Carrying placards inscribed with demands to protect the lives of Hazaras, the participants called for an immediate arrest of the terrorists and demanded that the family of the victims be provided with over Rs1.5 million in compensation for each slain worker.

Speaking on the occasion, JAC leaders Karamat Ali, Anis Haroon, Qazi Khizar and Saeed Baloch condemned the killings of the Shia Hazara workers in Balochistan. They described the prime minister’s attitude as stubborn for not visiting the bereaved families, who have staged a sit-in in Quetta and are not ready to bury the victims before the prime minister visits them.

They condemned both the federal and Balochistan governments for “their failure to protect human lives in the province”. They said the FC had several checkpoints at every nook and corner, but despite that, the terrorists killed the workers and fled away easily.

They called the terror activity a failure of the security agencies and the provincial government.

At the main sit-in camp set up by the MWM at Numaish Chowrangi, MWM leader Allama Baqir Abbas Zaidi said the peaceful sit-ins would continue across the country to show solidarity with the families of the Hazara community’s martyrs “until the heirs themselves announce the end of the sit-in and the burial of the bodies”.

In another sit-in, MWM leaders Bashul Ali Hussain Naqvi, Allama Dali Anwar Jafari, Allama Sadiq Jafari, Allama Mubashir Hassan and others spoke to the protesters. They asked the prime minister to visit the heirs of the martyrs and fulfil their demands.

“This is not the first attack on the Hazara tribe and the Shia community. Leaders of the banned parties openly issue fatwas for killings,” said Masoodi, demanding an operation against the proscribed outfits.

“Anti-state elements are conspiring to divide our society on the basis of sect and religion, and this is the first step towards the collapse of the system,” he said.

SUC leaders urged the national security institutions to take action not only against the banned outfits but also against those who were involved in spreading hatred and indoctrinating youths with hatred.

Sindh Information and Local Government Minister Syed Nasir Hussain Shah has appealed to the protesters to vacate one passage of the blocked roads on humanitarian grounds to facilitate the movement of the emergency service vehicles, including ambulances, adds our correspondent.

Speaking to media persons at the press club, he appealed to the religious scholars leading the protest sit-ins to vacate some passage of the blocked roads to facilitate the movement of patients through ambulances and to ensure oxygen supply to the hospitals in the city.

He also appealed to the prime minister to go to Quetta to show sympathy with the bereaved families.

Due to the blockage of main routes, the Federal Urdu University of Arts, Science and Technology postponed the entrance test for the undergraduate programme of Pharmacy-D. A day earlier, the varsity had circulated the test schedule. Later on, the varsity convened an emergency meeting in which it was decided to reschedule the test. The varsity will announce the new date for the test later.