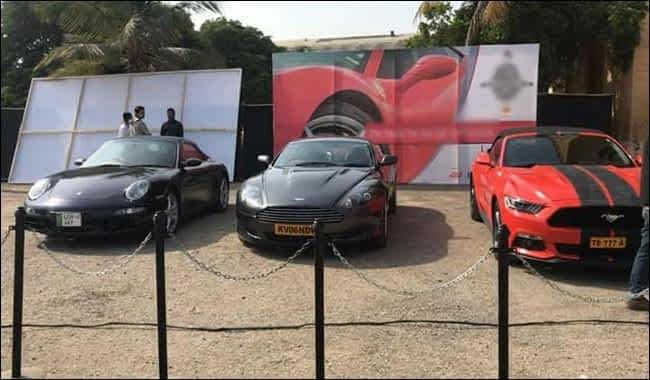 Motorheads Pakistan in collaboration with Bullseye Communication organised a two-day car show at the Karachi Frere Hall. The first day kicked off with various latest models of cars, jeeps and motorbikes on display.

The cars were attracting crowds of car enthusiasts in large numbers throughout the day. Car enthusiasts from all walks of life were present at the location and seen taking selfies and pictures of the magnificent display of automobiles.

Ahsan Mohsin Ikram, lead organiser of the event revealed, “The automobiles present in this show are very exclusive and owned by one or two people in a city of more than 16 million people.”

“An estimated number of 65 cars are on display ranging from luxury cars to jeeps, motorbikes, and sports bike. All the vehicles belonged to individual owners.

“The visitors will get to see cars such as Ferraris, Bentleys, Aston Martins, Jaguars and Rolls Royces to name a few. In addition, motorbikes from leading manufacturers including Harley Davidsons, Suzuki Hayabusas, BMWs, Motorguzzi, Ducatti and Triumphs among others will enthrall them as well.”

The second day of the display starting at 12 pm Sunday will include around 100 of the most historical cars ever.  “It will include a French sports car that has been brought in from Islamabad and Rolls Royce from the year 1947 in which Quaid-e-Azam and Mount Batten had travelled,” said the organizer.

The club also organises bike rallies that travel all across the country. Recently it organised its 15th rally that started from Landi Kotal Khyber Pass and travelled all the way to Karachi.

“We try to bring together people and take them to unexplored areas in the country in an attempt to promote tourism and encourage travelling,” he elaborated.

Leonardo DiCaprio sings praises for Greta Thunberg, terms her a 'leader of our time'