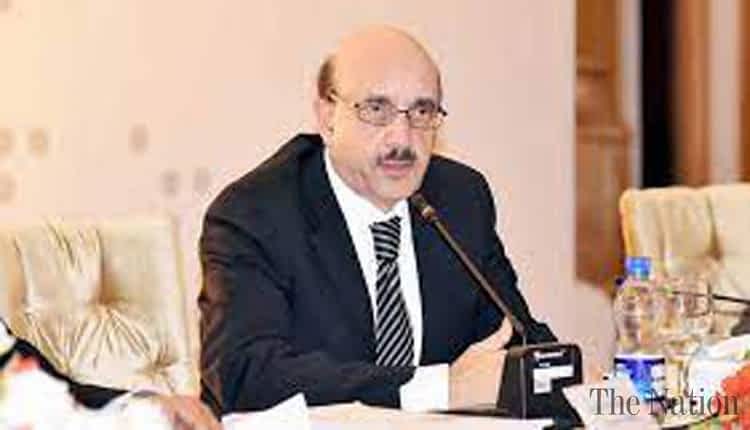 mirpur (AJK)   –  Azad Jammu and Kashmir (AJK) President Sardar Masood Khan on Sunday strongly condemned the arrest of two sons of the martyred All Parties Hurriyat leader Muhammad Ashraf Sehrai in Indian Occupied Jammu and Kashmir, describing it as the worst form of fascism by the Indian government.

Reacting sharply over the police raid at Ashraf Sehrai’s residence in Barzulla Baghat area of Srinagar and the arrest of Mujahid Sehrai and Abdur Rashid Sehrai, the State president said in a statement on Sunday that the arrest had been made when the family was mourning the martyrdom of Ashraf Sehrai, the AJK President office told media on Sunday evening.

Sehrai, a popular Kashmiri leader and close aide of veteran Kashmiri leader, Syed Ali Geelani died in Indian custody in Jammu on May 5, 2021. His two sons have been have been arrested in connection with a false case registered against them on 6 May 2021 at the police station in Tekkipora-Sogam, the native area of the martyred APHC leader.

Earlier, over a dozen others close relatives of Mohammad Ashraf Sehrai were also arrested by police in connection with the same false case.

The AJK President maintained that such brutal and inhuman acts of the Indian Government cannot deter the Kashmiri youth from their liberation struggle. “Freedom and the right to self-determination are the fundamental human rights of the Kashmiri people, and to demand these rights was no crime,” he said.

Khan reiterated that the people of Jammu and Kashmir would continue their struggle for the realization of their fundamental right till they are provided an opportunity to decide their future through a free and fair plebiscite in accordance with the UN Resolutions.

He also appealed to the UN Human Rights Council and other international human rights organizations to take notice of the massive human rights violations by the Indian occupation forces in Jammu and Kashmir, and hold India responsible for it.

Meanwhile the Indian authorities banned people to visit the residence of martyred senior APHC leader, Muhammad Ashraf Sehrai in Barzulla Baghat area of Srinagar to condole on the death of APHC leader and to express solidarity with the members of the bereaved family by deploying a large number of Indian police and paramilitary personnel in the area.

Lawyers want govt to quash FIR against ex-judge, others