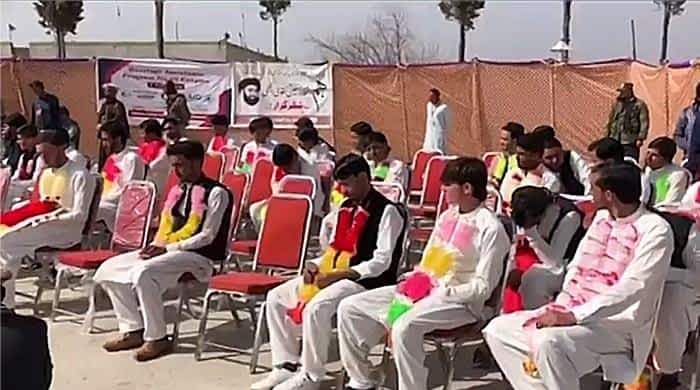 KURRAM: The Kurram district in Khyber Pakhtunkhwa’s Kohat division on Tuesday saw dozens of couples tying in the knot in a mass wedding held at the Parachinar Eid gah — an open-air enclosure.

Among the guests were tribal leaders and local figures from across the district who participated in the event, as well as the commander of the Pakistan Army’s 73 Brigade, numerous officers from the forces, the families and relatives of the brides and grooms, and others from the civil society.

“We’re very happy that we’re being married,” said one groom. “We had been engaged for several years but was unable to hold a wedding due to poverty.”

According to one of the attendees, some of the 50 grooms in total had been waiting for almost 10 years to get married after their engagements.

“They were unable to organise a proper wedding” due to the rising costs, a guest at the wedding mentioned.

Tribal leaders underlined that even ensuring two full meals a day was a challenge amid the uncapped inflation that was hurting daily-wage earners and middle-income families across Pakistan.

“In this era of skyrocketing prices, organising mass weddings is a commendable effort,” they said.

Organisers noted that clothes, kitchen utensils, and carpets, among other necessary household items, were given to the newlywed couples.

“If they decide to go and set up their very own home, they wouldn’t have to purchase anything from the bazaars by themselves but they would have a properly set-up home for themselves,” the organisers stated.

To date, some 5,000 couples have been married in such mass wedding events, they said.

Local leaders insist that mass weddings should continue henceforth especially keeping in mind the importance of weddings and how underdeveloped their areas were.