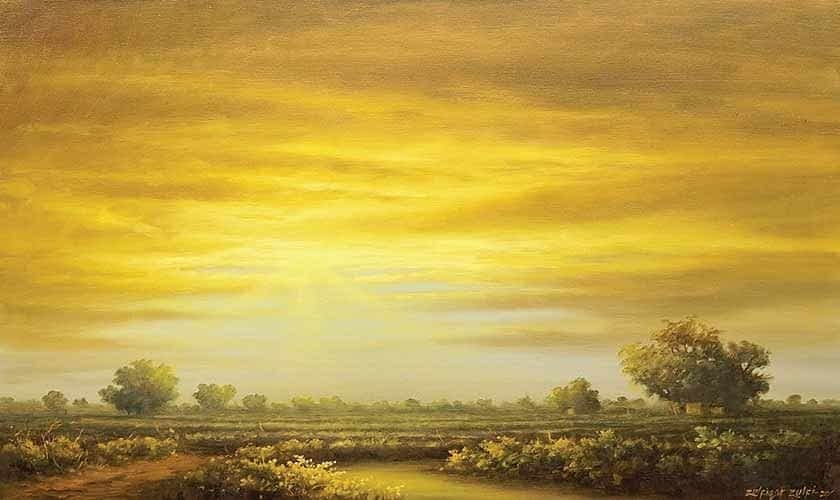 In the hustle and bustle of city life, one still cannot contravene the soothing effects of nature. Many Pakistani artists have depicted the beauty of nature in their work. They include Ghulam Rasool, Ghulam Mustafa and Zulqarnain Haider. Zulfiqar Ali Zulfi too has been recording the enthralling beauty of nature.

Zulfi, a recipient of the Pride of Performance award, displayed an assortment of beautiful and maleficent landscapes at the Artciti Gallery, Karachi titled Whispering Meadows. The sky being the focal point in his paintings, he has illuminated seasons and time by playing with the contrasts. The rising sun highlights the freshness of a village morning in one piece. In another, the golden rays of a setting sun turn the trees, soil and lakes into a window on paradise. The light and dark tones of yellow and orange dominate the canvas. The composition is subtle and smooth. Zulfi’s understanding of colour, contrast and textures is a distinctive feature of his style. The portrayal of light falling upon the lush green trees, soil, pathways and dense clouds speaks of Zulfi’s command over the medium and highlighting the features of his work. These facts make his paintings realistic enough to be mistaken with a photograph.

By making the strokes back and forth, Zulfi has outlined and enhanced the work in a free style. He visually translates the magnificence of the Lahore lifestyle. His works revolve around the rural life. Each of his paintings captures scenes where nature divulges its exquisiteness. A distinct feature of his work remains the excitement and mood that he creates in his landscapes. There is something extraordinarily appealing and alluring in his work that makes them different every time.

He has expanded his canvas and stretched scenes of the Lahori street life where people are shown standing at shops in narrow alleys. In most of his works there is a touch of autumn. In one of his images, he has painted a shepherd herding a flock of sheep, a frequent scene in the Punjab villages. One can actually feel idyllic quiet and softness of the weather in his canvases. His signature palette and composition keep viewers’ attention intact.

Since his childhood, Zulfi has been a witness to the beautiful scenes in Dera Ghazi Khan that become his inspiration for painting the landscapes.

He has captured many such scenes and given them a meaning. His nimble strokes apply fine layers of colours that he uses to explore tens of shades of a single colour. Zulfi’s deep understanding of the medium makes an onlooker feel the cold breeze and foggy winters, smell the grass and the warmth of sunny days.

The oeuvre is created with such dexterity that it takes the spectator’s mind to the scenes where one becomes a witness to the seasons; foggy winters in which the vision goes blur and first ray of the sun that falls on earth. Zulfi continues to explicate the moods of the Lahore city in contemplative yet flamboyant ways. He explores the same medium in each display yet keeps away any feeling of monotony or redundancy.

The writer is a freelance journalist based in Karachi