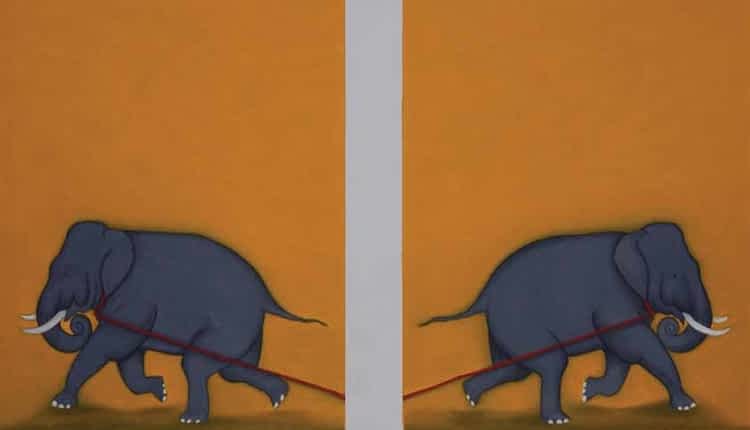 Khan’s love for animals informed her current series. Her work titled A Congress of Crows shows crows sitting, drinking water from a clay pot and flying. Crows are perceived as conniving winged creatures, but Mulghalara sees them otherwise. Her interpretation of the crows is different. She sees them as a symbol of unity. “When a crow dies, the whole pack gathers to mourn over the body. This is how I see crows; they show unity in grief.”

In her oeuvre, one could see horses and elephants forming mirror images. That is what you observe at a glance but the artist classifies them through a different lens. She has painted a story of two elephants in a tug of war using a red rope. They look similar yet they are moving in opposite directions. In the piece, The Gentle Giants, her gentle strokes add to the smoothness and reflect the process of transmission she seeks in her work. She maintains the elegance of the traditional miniature but adds a touch of her own vocabulary.

Her pieces appeared to change the way animals are viewed in miniature paintings – as a symbol of war (horses) or royalty (elephants). The language expands as one moves from one intriguing piece to another.

Pride of Kings showed two horses walking in different directions. Here, Mulghalara uses her medium to share the journey of transition. She sets one subject in two microscopes, portraying one subject inspiring diverse notions. The old and the new are put together to form what conveys contemporary or modern meaning.

Mulghalara’s body of work seems influenced by Mughal miniature technique. However, she has stylised it in her own distinct way so that it appears more dramatic due to her colour scheme; the fearless and abundant use of colours, contrast and layering. This juxtaposing of a traditional technique with contemporary stylising makes her work alluring, detailed and comprehensive.

On two of the gallery’s walls were paintings that looked untidy, tedious and hastily done from a distance.

Hammad Gillani’s work on wasli paper spoke of chaos. The images were highly thought provoking and open to much discussion. The miniatures were based on Hammad’s everyday observations. In one of his images, he had used a red marker to sketch a crowd. The colour red made the crowd look noisy, fuming and angry, demanding ‘justice’ through hanging of an individual.

There was a thick gold border around a few of his images. This hinted at calmness, harmony and peace. These border showed the two sides of life where happiness is ephemeral. The people, placed in different settings and experiencing different emotions represented how happiness is transient and subject to disruption by outside clamour and chaos.

Gillani had used calligraphy, usually a symbol of coherence and reconciliation, to echo various expressions: anger, whisper, violence. The thoughts expressed on the paper showed how fracas, anger and noise are perturbing for the artist.

Colours were the strongest mode of communication in his work. Once this was understood, they become the language of his narrative that focussed on pandemonium, viciousness and unpredictability. The artist had used the traditional miniature painting techniques but created his own vocabulary. “Visually my gestural paintings are images of people in varying postures and motion. The texts in my works are meaningless and illegible. I want it to go beyond the idea of communication in a direct sense,” he said.

The writer is an art, culture and entertainment journalist from Karachi, she can be reached at mmaheenaaziz @outlook.com

Kangana Ranaut is ‘eagerly waiting’ for Instagram to ban her

The king of ghazal | Art & Culture