Lubna Jehangir celebrates strong women on canvas with her strokes 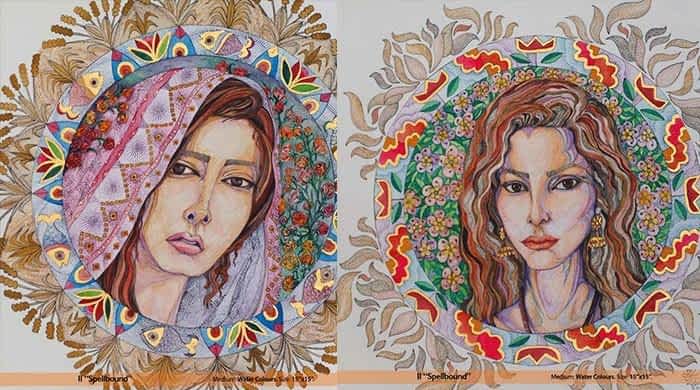 Painting became a lifetime romance for Lubna Jehangir as she practiced painting patiently in a very delicate way without any breaks till today. Through all these years painting became a meditation for her after spending a long hectic day; a means to calm down.

A keen reader of fantasy and folklore, Lubna’s visuals evolved characters from Western, Persian and Punjabi folklore. She unwrapped her images gradually by using fine dots of various colours.

In her paintings displayed at a solo exhibition at Oceans Art Gallery, the figures were well-composed, rich in colour and multilayered creating visuals that narrate a story which may be familiar to viewers.

She unfolded her tale through images of flowers and foliage, puppets, birds, fish and human faces which were repeatedly used to knit the stories. The human figures, especially the female, seemed to emerge spontaneously among branches of trees, utensils and pots, thus she suggested that the female figures are trapped in various situations, no matter where she belongs to.

She portrayed women who survived difficult professional and personal emotional journeys, situations and experiences which they find themselves tackling everyday living in an overwhelmingly patriarchal society.

She used black and white images merged with colourful women figures to depict the real position of women in the world. Women spread colours in their respective societies they belong to. They are the basis of life in this world and in any role that nature has given them they play it with sincerity and fill colours in the life of their loved ones by their dedication to them.

She wanted others to recognize women’s position and role in our society so they can utilize their whole potential in development of their homes ultimately that converts to development of society and the country.

But most of the people of our society do not realize their importance and treat them as second leveled citizens, which create imbalance in society and results in different social and personal problems.

Lubna, therefore, tried to reflect strong women of our society so other women could learn from them and fight for their rights in a patriarchal society. The ambiance of her paintings revealed local scenarios with strong women dominating. Her works were different from frequently depressing subject matter of the oppression of women portrayed by many artists. Instead she used vibrant colours to portray strong women celebrating feminism.