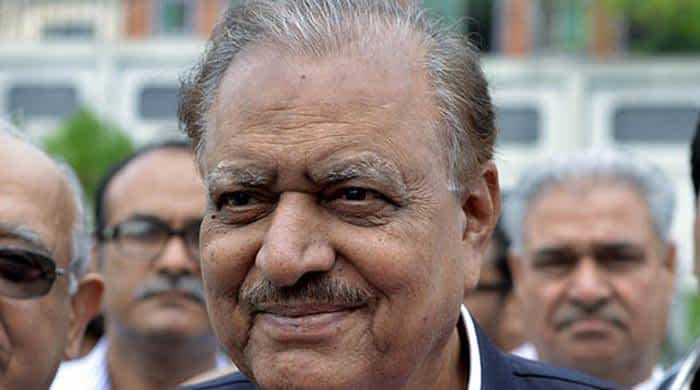 KARACHI: The funeral prayers of former president Mamnoon Hussain were offered on Thursday and he was later buried at a   graveyard in the metropolis’ Defence Housing Authority Phase 8 neighbourhood.

The former president breathed his last at a private hospital in Karachi a day earlier. His son Arsalan Mamnoon said his father had been battling cancer.

The funeral prayers were offered at Masjid-e-Sultan, led by Mufti Taqi Usmani.

The former president died at the age of 80 and was undergoing treatment at a private hospital for the last two weeks, his son said.

Hussain was the 12th president of Pakistan, who served from 2013 to 2018 when PML-N was in power. He was one of the most senior PML-N leaders.

Originally a businessman, Mamnoon Hussain was born on December 23, 1940, in the Indian city of Agra. He started his political career as a member of the Muslim League in 1969. At the time, he was made the joint secretary of the Karachi chapter of the League, when former minister of state for foreign affairs Zain Noorani was its president.

Hussain had earned an MBA degree from the prestigious Institute of Business Administration (IBA) Karachi.

He was actively involved in the PML-N since 1993 when Nawaz Sharif was in the Opposition. Before Hussain was appointed as the governor of Sindh by Prime Minister Nawaz Sharif in 1999 — a position he served for less than six months — he worked as an advisor to the provincial chief minister (Liaquat Ali Jatoi) for an insignificant portfolio.

After the promulgation of military rule in October 1999, Hussain firmly stood with Nawaz Sharif when multitudes of PML-N leaders simply abandoned their party.