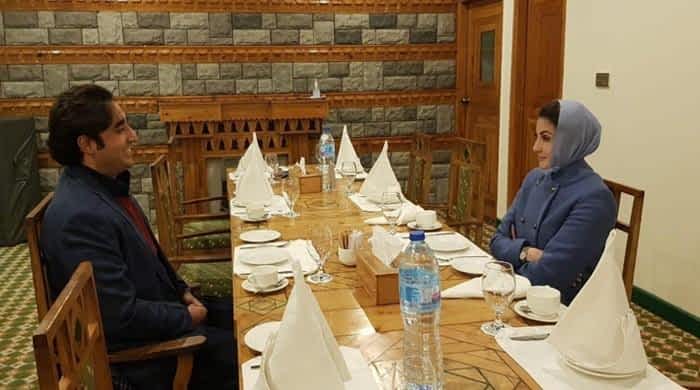 PPP Chairperson Bilawal Bhutto-Zardari reacts as PML-N Vice-President Maryam Nawaz speaks during a meeting between the leaders of two of the Opposition parties here in Gilgit-Baltistan, Pakistan, November 11, 2020. — Twitter/MediaCellPPP

PML-N vice-president Maryam Nawaz and PPP chairman Bilawal Bhutto-Zardari held a meeting on Wednesday after they concluded their election campaigns.

In the 12-minute meeting, the leaders discussed Pakistan’s political situation and the country’s future, as well as the upcoming Gilgit-Baltistan Election 2020.

Maryam and Bilawal exchanged views over tea before heading out to the garden for a brief stroll where they continued their discussion. The two also discussed future strategies in light of the current political environment.

Maryam and Bilawal are both on a campaign trail in the northern areas ahead of the forthcoming Gilgit-Baltistan Election 2020.

An interesting competition is expected between the ruling PTI, PML-N, and the PPP in the Gilgit-Baltistan Election 2020 for the region’s assembly, slated to be held on November 15.

Interestingly, two surveys recently conducted by Gallup Pakistan and Pulse Consultant showed that a majority of the people in the northern region leaned towards the PTI as their first choice to vote in the Gilgit-Baltistan Election 2020, followed by the PPP.

The PML-N, however, was the third-most popular party among the people.

Karachinama: Up, close and personal