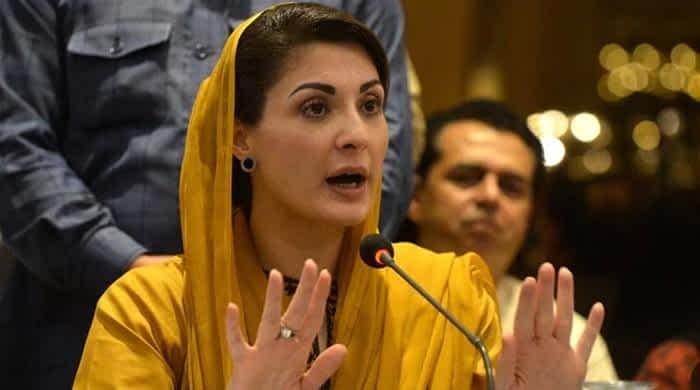 PML-N vice president Maryam Nawaz addressing a press conference in Karachi. — AFP/FileYou have time to play with dogs but not place a hand over the heads of the oppressed, Maryam Nawaz lashes out at PM Imran Khan You are responsible for 220mn people, says Maryam NawazMaryam describes PM Imran Khan’s statement as “height of insensitivity”

QUETTA: PML-N vice president Maryam Nawaz on Friday lashed out at Prime Minister Imran Khan for not going to Quetta to console with families of the Machh tragedy victims.

Speaking to Geo News, the PML-N leader described the premier’s earlier statement on the Hazaras as “the height of insensitivity” and castigated him for having time to meet Turkish actors and playing with his dogs but not consoling the aggrieved Hazaras.

“If you refer to the cries of the people as blackmail, then you should be ashamed of yourself,” she added.

“This is akin to blackmailing the prime minister,” he had said.

PML-N vice president Maryam Nawaz shows the photos of the Hazara community members protesting as she addresses a press conference in Karachi, on January 08, 2021. — YouTube

The Hazaras have refused to bury 11 slain coal miners who were shot dead in cold blood last week at a coalmine in Machh by unidentified assailants. Protest sit-ins have taken place in various parts of the country over the tragedy.

Maryam lamented that the Hazaras were sitting out in the open, in the freezing temperature, with the bodies of their loved ones and the prime minister had yet not visited the area.

“They are asking you to come and place your hand over their heads,” she said, referring to the bereaved families. “They are asking for some guarantees [from PM Imran Khan] and will bury the dead after that,” added the PML-N leader.

Maryam said that visiting the grieving families was the prime minister’s obligation and “he will have to do this”.

“You have time to meet Turkish actors,” she said in reference to the prime minister’s meeting with the founding team of the Turkish hit TV series Ertugrul from the previous day. “You have time to play with your dogs but not place your hand over the heads of the oppressed,” she added.

Speaking earlier at a ceremony, the prime minister had said that he would go to Quetta today if the Hazaras buried the slain coal miners.

The premier had said he wanted to clear his position on the matter.

“All the demands put forth by the protesters have been accepted; therefore, making the burial [of the dead] conditional on the prime minister’s visit is not appropriate,” he was quoted as saying by Geo News.

He said that when the 11 coal miners were killed in Machh, he first sent Interior Minister Sheikh Rasheed Ahmed to Quetta and then two federal ministers to assure the Hazara community that the government stood behind them.

“I assured them that they would be compensated and looked after as the affected families have lost their breadwinners,” said PM Imran Khan.

The premier had said the government then accepted all demands put forth by the Hazara protestors, but they are adamant that they would not bury the dead until the prime minister visits Quetta.

“Nowhere in the world can you blackmail a prime minister like this,” PM Imran Khan had said. “Because then [it opens the door for] every crook to stage a sit-in and demand corruption cases against them be withdrawn. This is very important.”

“The Hazara community has faced the most cruelty,” the premier had said. “They have been persecuted in ways no other [community] has been persecuted. I have visited them and seen their fear.”