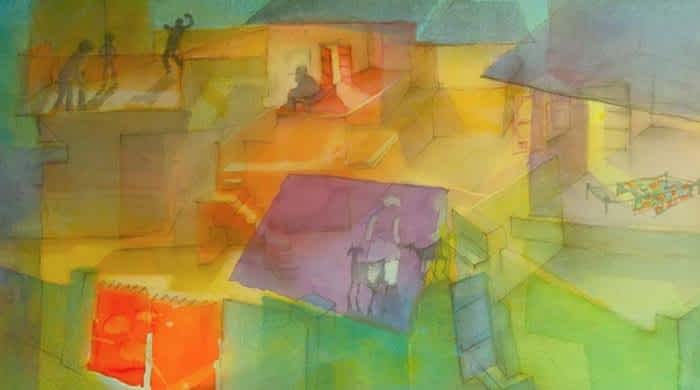 Masood has delved into human emotions and sentiments and memories in his awe-inspiring work while conveying these volatile and unpredictable concepts through his paintings with commendable ease and precision.

He has incorporated transparency in his style of his work thus creating a multi-dimensional view of the same situation. The layering heightens the translucency and viewers can see surfaces overlapping. The great merging and overlapping fascinates both the art lovers and the artist, the most.

Moreover, Masood’s working pattern makes his art unique. Whether black and white or coloured his paintings emit soothing calmness that attract the viewers. Although his work has soft tones regarding colour but it portrays harsh realities of life in a different way.

Various figures of men, women and children old and young along with animals – cats, dogs, goats and buffalos reflect the daily life of common people in rural and urban areas of the country.

Masood has transformed delicate lines and textures in a meaningful dialogue. He has brought out the feelings, emotions, and perception that are involved in producing a particular painting. The situations depicted in the paintings talk a lot about his emotions, moods, and mood swings.

The subjects of Masood’s paintings are rooted in these emotions and then gradually these emotions took form of images. The visuals are actually active conversations through the images.

His work is related to his life, to his memories. In most of his art, Masood has tried to resolve unresolved issues. If an image is chaotic and complex then it simply reflects a confused state of mind of the artist at that time. One feels a sense of unity, cohesion, and consistency in his work. His inspirations definitely come from his surroundings.

Masood, while elaborating his work said, “Transparency is the quintessence of bare reality as it remains constant on my surfaces. I express the stark reality of life – blended with feelings. In the remote recesses of my subconscious lies an effort to create a spiritual climate that touches the heart. I feel a sense of new liberty when the beauty of every form is clear, visible and not overlapping each other, it creates a multidimensional view.”

He adds: “I have expressed my outrage at the hypocrisy in life – religious, social, economics – that cloak and disguise our true intentions. My works, revealed a world emphasizing the simplicity and joy of spiritual contentment in contrast to the contemporary situation that face the bizarre perils of life. I have peeled off layer by layer the pretensions, exposing the fables that determine our lives. My search is to seek the new possibilities in realism.”

Priyanka Chopra's staggering net worth almost double than that of Nick Jonas?