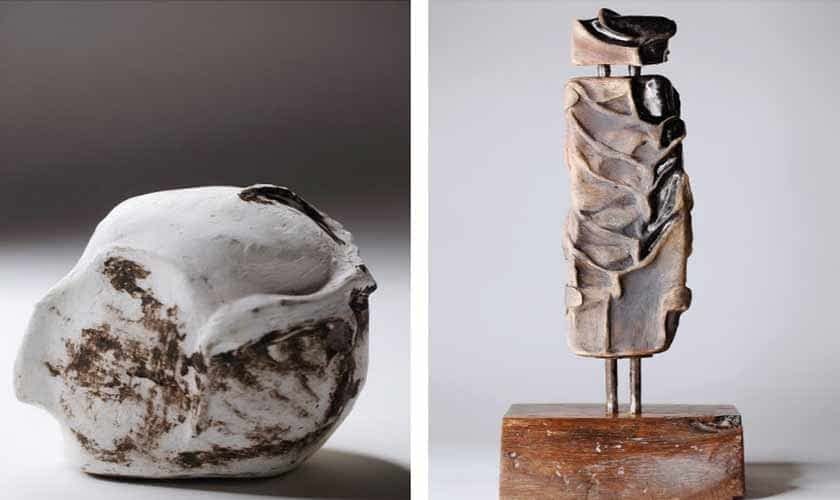 Have you ever gone for a walk in the upper zones of Hunza and Nagar? One may take the chance to explore them and immerse in their ancient feel, allowing their serenity to descend upon one and find new inspiration in their endless wealth of natural forms. On these walkabouts, one may invariably stumble upon remnants of white settlements from gold-digging days. Old chimneys and ruined brick walls, ceramic shards and rusty, half disintegrated tins never fail to conjure their ghostly dwellers to one’s imagination. Their presence is almost tangible, yet time always keeps them well out of reach. One may get overcome by a similar feeling upon seeing Shazia Zuberi’s new series of ceramic sculptures titled: ‘Markhor’ (the mountain ibex) Art Chowk Gallery, Karachi.

The lack of a prescribed background of formal education in the visual arts makes the rapidity of Zuberi’s emergence as an acclaimed ceramist all the more remarkable. She has achieved a level of technical expertise and sophistication to accompany her natural flair for creating distinctive and imaginative ceramics. Both cerebral and intuitive in their making, her glazed and slip-covered pieces exhibit qualities derived from the landscape. Surfaces encrusted with organic cavities and curves of varying sizes allude to appearances and textures found in the natural environment. These intrepid exteriors created by the glaze are complemented by a wealth of striking colours, combining to conceal the underlying fragility of the forms.

Zuberi’s work seems representational in its portrayal of the recognisable characteristics of the landscape. As a painter applies paint to canvas in order to capture the essence of a place, so Zuberi introduces glaze to clay. The subsequent kiln-firing, facilitating a synthetic and accelerated re-enactment of environmental effects upon the earth’s surface, transforms the glaze into a bas-relief of limestone cliffs and mineral deposits.

Remnants of ruined architectural forms can also be suspected lurking in the detail of numerous pieces. Dry stone walls, castle fortifications and various other fragments of man-made structures seem to be revealed and belie a landscape that is pure and untainted. Instead, Zuberi addresses a landscape that is contemporary, scarred and littered with the evidence of human existence; a landscape that is reclaiming its territory by consuming all that is external to it.

The ibex as a leitmotif has been central to Zuberi’s practice in the new body of work, likened to the situation the entire mankind is caught in due to the Corona pandemic. Like markhor, the shy, reticent, recoiled goat species that lives hidden away from the human eye in isolation, the pandemic subjected the humankind to isolation. In some pieces, she has attempted to retain the fundamental properties of archetypal vessel forms; the shallow bowl and the plate. Inherited from post-modernism, this loyalty to traditional vessel forms seems to distinguish pottery from sculpture. Although based in function and made of clay, the forms she has chosen to concentrate on – the plate, the bowl – allow her to explore and expand pure object/space relationship. A horizontal plane, parallel to the table surface – the plate, a place to rest food. The transitional plane, diagonal to the table surface – the bowl, a form to hold a liquid. While each form stands on its own with strength, consistent with the tradition of function, each also benefits and grows from interaction with the end user. These are not just some generic decorative forms but can be considered objects of use.

A group of heads, all Untitled, much similar in colour, form, size and expression, have a dry and earthy quality to them. In this case, an off-white is thinly and unevenly brushed on over underlying layers of rusty brown and even a pastel like green. These underlying colours are only visible here and there, appearing in small patches through the transparent white or in uncovered spots. The depth thus created in the surface lends the pieces a sense of history. Their volume and interior space speak of a living content. They strongly convey the feeling that these forms are living beings from a distant past, possibly merged with natural but lifeless rock forms. The free-flowing ibex drawings on the surface are like rock paintings or engravings, cultural symbols, abstract remnants of a ritual activity.

On a formal level, multiplied shapes are visually pleasing, and provide the comfort of the expected. About a generation after William Morris and John Ruskin, British mathematician and philosopher Alfred North Whitehead stated: “Art is the imposing of pattern on experience, and our aesthetic enjoyment is recognition of that pattern”. Process philosophy, on the one hand, identifies the ‘real’ with change and dynamism. Zuberi takes a cue from that line of thought because she creates definitive and discrete objects that have an enduring quality, and then combines them, which indicates the potential for transformation. The individual pieces are moveable, like checkers on a board. If the elements are chips on a game board and the game that Zuberi intends to convey is the complexity and interdependence of nature, the chips take on an anthropomorphic quality with humans as participants in, and subject to, something larger than themselves.

Zuberi makes forms that provoke contrasting reactions, they embody a range of sentiments and they merit quiet contemplation. A love for her material and craft has enabled her to produce an extensive body of work over the years. The past few years have resulted in the form becoming more sensual and sophisticated, the scale gradually increasing and the method of structure dynamic. There is finesse in both making and in finish. The glazes have become richer, achieving a range of colour through soft iridescent golds, browns to black.

As with her mentors, Zuberi finds no disadvantage in the preferred use of the electric kiln over gas. Of course, she is concerned with touch too; the way the pot, made by the hand for the hand, sits in one’s grasp is an important feature. Viewers are encouraged to touch as well as look, the balance of form and glaze offering a satisfying tactile experience as well as a visual one. Surfaces that are seemingly coarse to the eye are in fact smooth to the touch. Unfortunately, invitations to touch do not occur within the gallery environment, galleries are, of course, reluctant to jeopardise artwork or claim against their considerable insurance premiums.

It is the artist’s prerogative to allow chance and opportunity play a role in the work that she produces. Like the human DNA, where variety grows from the combination of similar original elements, the original DNA of these objects has set up a vast resource for Zuberi. The choice to work within the confines of an established set of rules, together with the potential variations, sets the stage for an amazing variety.

Nawazuddin Siddiqui sheds light on what helped him achieve success